Treasure of the Abandoned City

Treasure of the Abandoned City is an action adventure game from Alec Stamos with artwork by Todd Luke. It continues the Tales of the Renegade Sector episodes with a loot hunt through space, sending you on a quest to find Laserbeard's treasure hidden somewhere on the dusty dry planet of Seltan. Fortunately, you get to punch and shoot a bunch of bad guys along the way! 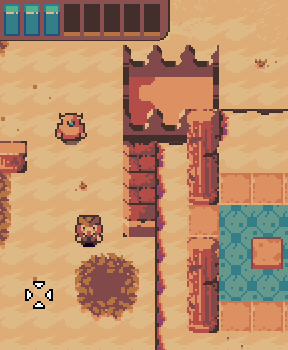 Move around with the [WASD] keys, interact with characters, signs and the like using [E], and open your inventory by hitting the [spacebar]. You carry a few basic weapons to keep the boulder-tossing bad guys at bay, but a lot of time will be spent avoiding dangers and solving simple puzzles throughout the sparse landscapes. A helpful hyper-glove allows you to punch nearby foes as well as pick up heavy objects, giving you a way to defend yourself even if you're low on ammo.

Treasure of the Abandoned City is a nice mixture of action and adventure elements, stepping back and forth between the genres to give you moments of excitement punctuated by moments of intrigue. The only real downside is the screen's tendency to follow the mouse a little too closely, resulting in jerky scrolling and some confusing close-quarters battles. It doesn't improve the overall experience, naturally, but it isn't severe enough to cut into the enjoyment factor. Treasure of the Abandoned City is one of those games you really won't want to stop playing. The blend of action and adventure elements is smartly done, and the overall challenge is well-rounded enough to offer some resistance without causing frustration. Plus, who wouldn't want to find the treasure of some dude named Laserbeard?!

Play Treasure of the Abandoned City

Windows:
Get the full version (ad-free, pay what you want)

Mac OS X:
Get the full version (ad-free, pay what you want)

Linux:
Get the full version (ad-free, pay what you want)

Maybe there's a good game hidden away here, but the jerky scrolling/low framerate meant I spent about 5 minutes with it and gave up.

I liked this one. It was a lot more challenging than most flash games, which made it fun for me. The only thing I found confusing was that when I finished the game there were still a lot of blank spots in my inventory - half of the weapon and food slots had never been filled. Made me wonder if I'd missed things.

This flash game is original, I had a good time there. Well done to the developers