Yarr, me hearties, it's time for a game about pirates! These aren't just your garden-variety scurvy dogs, either. The pirates of Treasure Maps love two things: logic puzzles and treasure chests. Treasure Maps is Twisted Mirror's sequel to Alberi, but with an improved interface, 350 more levels, and a charmingly piratical aesthetic. Like its predecessor, it combines sudoku and picross, only instead of planting trees, you're finding buried treasure on an island. 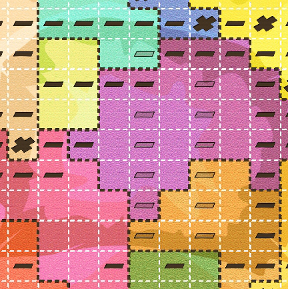 You start with a grid divided into colored zones. Tap any square to mark it as empty, and tap again to mark it as containing treasure. There are only three rules about placing chests. One: Only one treasure chest in every colored zone. Two: Only one treasure per row or column. Three: No chest can be immediately adjacent to another, either horizontally, vertically, or diagonally. There are double levels where there are two chests per row, column, and zone, but they still can't touch each other. (No self-respecting pirate would bury two treasure chests right next to each other.) Although all of the puzzles can be solved using only logic, the button on the lower right of the screen allows you to make guesses without risking your progress.

Treasure Maps balances its elements quite well. The pirate-ness doesn't overwhelm the simplicity of the game itself, and the huge number of levels ensures you'll never encounter a bottleneck. Don't be alarmed by the presence of microtransactions, either: you get forty levels for free, and if you want to play more, you have the option to only buy levels that are the difficulty you want. All of these put together make a game that's challenging to play and fulfilling to solve. And in the end, isn't that the real treasure here? (Well, maybe the opportunity to make endless pirate jokes is. It's hard to tell.)