Welcome to the infinitely bizarre world of Treasure Bear. Leave all notions of logic behind, strap a big chest on your bear shoulders and step into this entirely whimsical pixel art platformer. 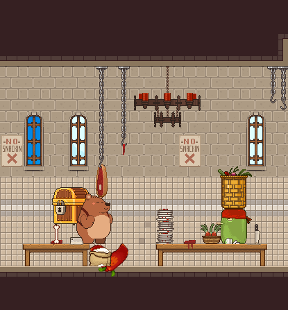 You're a chubby, rosy-cheeked bear and, naturally, you like to eat. That's how you end up munching fruit on board of Captain Shiphead's ship headed for Slime Island (yeah, I'm serious). Unfortunately, you are discovered and thrown into Slime Prince's dungeon. Fortunately, slime guards being as stupid as they are, you manage to escape. You meet a treasure chest, another prisoner, and decide to team up with him, making the silliest superhero duo since Batman and Robin. You will fight your way through the castle and amass a pile of gold, using [arrow] keys to move, [spacebar] to jump and [Z] to run. The gold coins also function as your hit points, so you should try to get as much as you can. Keep an eye out for gems, worth ten coins, which are usually hidden in wall caches and quite easy to miss.

Treasure Bear is very beautiful and terrifically quirky at the same time. It sort of feels like a game you could have invented when you were five and playing with your plush toys, with your unbridled imagination and indifference towards logical reasoning. The levels are nicely (and hilariously) detailed and the characters reminiscent of Alice in Wonderland. The game is shorter than it could be, but that ensures that the simple gameplay never outstays its welcome. Also, it's still a bit rough, meaning that there might be a glitch or two here and there, but it definitely has enough redeeming virtues to make up for that. It's heaps of fun, a joy to behold, and it was about time someone made a game featuring one-eyed slimy cats as villains.

20 mushrooms for adorableness. So far so good...

My bear just fell off the screen and seems to be gone forever so I can either restart or quit the game..

Alas, as feared: the lag simply kills the gameplay. Z helps a little, but by the time we're talking boss battle, the fun gets gobbled up. Same old clunker of a computer though Flash is updated, for what it's worth.

Yeah, it's cute, but the gameplay is really sluggish, and not very imaginative.

Okay, I have a few thoughts: 1. You can press Z to run? That would've been something helpful to mention IN GAME. 2. Does anyone else think it's a little funny how the bear climbs ladders without moving any part of his body? It's like he's riding on an invisible elevator.

3. I can't figure out how to beat the rat boss in the broth bowl.

When he finally gets low enough that it seems like I can attack him, I end up drowning in the broth.

I hope the artist teams up with a game designer of the same caliber. As it stands the game is gorgeous, but the gameplay is repetitive, feedback is absent or obtuse, and the ending is a total non sequitur.

When you bounce off him, land on one of the platforms instead of in the broth. You need to do this three times to win (I think I won?)

Well, is the victory screen supposed to be

Just him with the bouncy pig meat thing with ''A'' or ''R'' at the top of the screen? I'm pretty sure it didn't freeze because when I right-clicked and used the monitor thing, I had at least 24 FPS. Pressing anything didn't work.

Other than that, pretty great.

The art was nice, though it committed the cardinal sin of platformers of not making it clear where I can stand and where I can't.

Unfortunately the gameplay rendered it unplayable.

Not ready to be released by a long shot. I decided to go left at the beginning of a level instead of right, and now I have no more bear and have to refresh the browser window if I want to keep playing, which means starting over from the beginning. Not gonna happen.

Boring, poorly-designed platforming. No engagement whatsoever; enemies and coins don't make any sounds, and in fact I don't think there is any audio besides the music. You can walk through walls going to the left near the beginning. Nothing is explained adequately. The boss make no sense in terms of its sudden appearance, what it is (some kind of rat thing, on a planet of slimes?), and how the player is meant to fight it. It should telegraph where its attacks will aim to give the player a fair chance at dodging them, and doesn't.

Good grief, that was pure tosh and no I am not going to rate but if I did that would be a 0 out of 5.

I only ever rage rate under 4 rarely if ever, this one did not even inspire rage or any rating, for the first time ever I wonder how this even made it to a JIG review.

VERY crap. If I can't kill stuff in any other way than jumping on them (as a BEAR!) then this game fails off the bat.
Jumps are too precise, platform edges are crap.

I got the the area with the steam pipe that boosted you up then reached a platform where I could no longer go any higher.

Google dude, you can climb out of there. Some elements are not actually part of the background.

I dunno, I think this was put up on JiG a little too quickly. This only hurts the developer; it's double jeopardy, they're rarely re-reviewed, and because mushrooms can't be undone, they'll forever have a low grade without even getting a chance to finish their games.

I would rather wait for polished, finished games. Or see them on a link dump. These betas aren't all Minecraft. And besides, I was under the impression that was JiG's policy anyhow, so it wouldn't be like every other high-volume gaming blog.

This really should not have been put on jayisgames yet. At least not as a full review. Considering that it's still early in development, it's really not fair to present it as a 'completed' game. The review makes no mention of that fact. If anything, it should have been put in a link dump.

I went in expecting a game that was finished as there was not a single mention of the fact that it was 'Super rough edition', as the description of the game itself says.

I just spent an hr to get to the rat boss, and all I get is a screen with an F? No continues? WTF Complete waste of my time.

I have to agree with the above comments. Mine main gripe however is that the treasure you collect is also like your health. Which kind of makes the whole thing pointless. In the words of the Goblin King, Such a pity...

The idea of treasure as health struck me as a good balance. Collecting all those secrets was about keeping myself strong, and avoiding damage kept my score high.

Some of the enemies didn't seem very well balanced. The sprouting mushroom foes were plentiful and difficult to evade. The spearmen enemies had a bad habit of being positioned where the player could not approach to trigger the spear and knock it away without taking damage. The foes with baskets on their heads seemed impossible to avoid on account of no indication when they would produce projectiles.

That said, the plentiful nature of coins makes bumps and strikes less significant, to the point that you can plan ahead to take damage on foes and still get a net gain. I finished with over a hundred coins and got an "A" despite losing a lot of coins on the rat boss when I tried to climb his chain and fell in the broth.

The art was gorgeous, however, and the detail in the levels was top-notch. If the mechanics get a heavy dose of polish and the level transitions get some more consideration so the transfer to the boss is not so sudden, this could be a hit title.

Overall its not a great game, but not the worse either. I agree on the end boss being strange starting it by jumping on an old mushroom and then facing a rat in a pool of soup, plus it would have been nice to know what to do. Only after I read the comments did I understand the other half what I needed to do. (I also was trying to climb the rope he had)The ending was sudden too.
There is enough coins to have keep up your health and it's easy enough to keep them with the enemies they have. I'm not sure what reason you can jump on the pork heads if they go no where. The jumps can be a bit hard in the later half, but the on thing I really didn't like was the ladders. I know is may seem trivial, but not being able to jump off the ladder really frustrated me some times.

Hello! Thank you for featuring my game, this of course is no were near what a finished game should be like and I don't know why everyone is treating it like one haha.

I did this for a game design contest on Stencyl ( witch really helped me out! ) And of course I had to rush it to the finish line. There are whole tile sets and enemy sprites that never got used.

It's lucky I got done what I did but please consider this only a beta ... nay PRE pre pre pre-beta or even a tech test! Im working with a great programmer to make this a real game and am aware of all the issues.

Thank you again I really love seeing that this was interesting enough for people to notice outside the site!