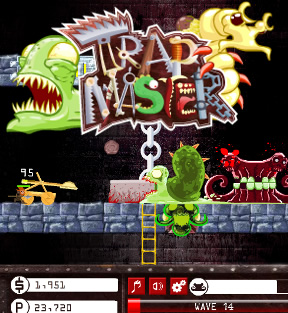 Trap Master, from Berzerk Studio, is a thoughtful, melancholic tale about love, acceptance, and finding one's place in the world through building an underground dungeon, populating it with any number of exceedingly unpleasant traps, and trampling all over the squishy remains of anyone who dares trespass. You know, just like that one episode of Sesame Street? A side-scrolling monstrous game of fast-paced destroy-all-challengers action, Trap Master tosses in some defense elements and a twisted sense of design to appeal to the monster in you. Groovy, baby.

Playing as either César or Maurice, the only two characters initially available, you're tasked with defending your dungeon's doom chest from those who would destroy it. (Presumably because any chest with teeth and two heads is probably not looking to make friends with the local populace.) You do so not only by purchasing various traps and obstacles to be placed throughout the dungeon, but by controlling your monster du jour and devouring/blasting/dissolving enemies for points and cash.

Enemies appear in waves from any of the dungeon's multiple entrances. (Maybe you should have picked a less accessible lair?) Using either the [arrow] or [wasd] keys, guide your monster around the screen, and use the cursor to aim, then click the mouse to fire. If you're close enough to a small enemy, you can devour them whole by clicking on them. Of course, you can't be everywhere at once, and so you'll want to make use of the shop between waves to purchase the various items that become available throughout the game.

Wrapping it all up is a warped sense of style that looks like something from MTV's early days, complete with heavy metal soundtrack. All it needs is to be interspersed with scenes of Beavis and Butthead headbanging on the couch. While some greater variation and detail to the enemies would have been nice, Trap Master still manages to stand out and proves what I've been saying for years; you can solve any problem with an acid bath. Especially door-to-door solicitors. 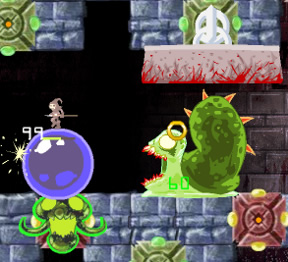 Analysis: But is Trap Master as fun to play as it is to look at? For the most part, yes. While not tactically very deep or what one might term "thought provoking" (unless that thought is RAWR SMASH PUNY INVADERS), Trap Master is a fast-paced, quirky way to while away a few hours. The idea of combining a side-scroller with a defense game is an odd one, but here it works. Trap Master isn't trying to be an intensely strategical title, so players looking for a slow, complex session should look elsewhere.

There are some limitations to Trap Master that keep it from becoming just another button-mashing gore-fest. Initially, you only have a certain number of slots available for each type of defense, traps or obstacles ("devices"), and each can only be placed in particular areas in your dungeon. While obstacles can be used up or destroyed, traps can be upgraded to increase their damage and overall nastiness. You can even upgrade your monster or your doom chest to unlock new and devastating attacks.

But the slow pace at which new items and trap slots are doled out may turn off those of us who are into more instant gratification. The boss battles, which tell a loose sort of story, only occur every ten waves, a shame considering they inject a lot more personality and interest into the game. Make no mistake, Trap Master is a ton of fun. But some more tweaking and a wider scope of enemies and customisation would have made it truly great.

Still, there's something about Trap Master that's appealing beyond its funky aesthetic. Sometimes all you really want is something fun and different to drop yourself into, and the game fills that niche nicely. It does make use of Gamer Safe, although using it isn't necessary to complete the game, and there are still enough challenges and achievements loitering around to keep the enterprising monster busy for a good while. If you've got fast fingers, a twisted sense of humour, and don't think you get nearly enough bone-crunching action in a day, Trap Master will be a friend to you.

It is indeed fun. Not too far into it yet; I have more productive things to be doing.

If for no other reason than that I object to being made to sit through almost two minutes of pre-loading adverts and obnoxious developers' logos before getting to the menu screen.

I seem to have encountered a bug. When I use the final upgrade power of the green snail guy, the game gets... wiggy... and eventually my browser hangs. I'm using Firefox 3.5. Anyone else have this problem?

I like it, fun game and reminiscent of Dungeon Keeper. However I ran into a bug on Level 8 where none of the bad guys could be killed. If I ate them it would still do the animation but they'd continue to walk on, and if they got hit by my shot or by a trap, they'd just writhe around on the ground. So the game wouldn't recognize them as being dead and make it impossible to finish the level. Even loading from a save game doesn't seem to fix it which kind of sucks.

@Hooba. Yeah, I have that problem too. The game works fine if you restart it, though. I just completed it.

Really enjoying this one!

I'm at level 22, and a little disappointed there won't be more item types revealed anymore. What with all the spots to put a smasher, it'd be nice if there were more than two kinds of smashers.

Other than that, though, I've got no complaints. Will probably play this through to the end!

Are you sure you want to know?

Jennifer is a floating brain with purple tentacles,4 eyes and a pink ribbon. She flies around rather than jumping, shoots a short range "psychic" beam, and "beams up" the little guys to eat them.

My strategy for placing traps.

I don't place any traps on the bottom level. Explosive ladders on the 4 ladders leading up to the 2nd level can effectively cut-off reinforcement from below. Freezing Blaster and Heavy or Spike Stompers are an awesome combination near the entrance. Near the chest, I place Thermal Blasters.

Avoid eating the little guys when trying to fill your power bar. The big guys will fill it in one bite and both big and little guys take the same amount of time to chew.

if you double tap an arrow key. She will teleport in which ever direction you hit, which allows her to traverse the screen extremely quickly!

How do you use the piercing shockwave with jennifer?

It is pretty fun to play the first few times around but what really got me annoyed was whenever the monsters did the shock wave moves by just pressing down the game would crash for me. It got frustrating when i had to be careful not to press down in the air at all, else id have to wait for everything to restart and start from last save...

I think there's a bug too. The high five achievement on mofunzone keeps appearing non stop.

I beat this game but when i beat lvl 9 first time and gone lvl 10, i don't know how can beat that stupid wizard. But in the end that 'BURP' is funny when player eats wizard.

i'm only on 24 but never died. i realy hate the guys who destroy you traps. stock is coming on 2 waves. i think a realy good way to not have to worry about as much people is to make the two ladders closest to the doom chest atatching the middle floor to the bottom floor explosive that way when they're gone, the people on bottom will drop striat into the lava/acid.