Lasers, explosions, moving platforms, treacherous steps, guns, acid pools, alien mind control, this game has it all. Transmorpher 2 is an awesome action puzzle platformer by FlashRush Games in which you control four aliens, each with special abilities. To move them, use your mouse or [arrow] keys, and switch between aliens with [1-4], collect fluorescent blobs and proceed to the end of the level. Simple enough, huh? Not really, when you have to morph mid-jump while being chased by angry balls of electricity and there's a laser beam underneath you and you may have left the iron on when you left the house this morning... Well, anyway, you see what I mean. 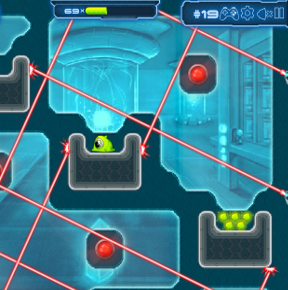 Transmorpher 2 is light years (yay, space reference!) ahead of its predecessor. To start with, the levels are vastly improved: they are much bigger, longer and more imaginative, so the game looks like anything but a generic physics puzzler. This in itself is a big change for the better, but it wouldn't be as good without a graphics upgrade. Transmorpher 2 delivers a smoother, more polished environments and a real sci-fi atmosphere, while still being fun and quirky. To top it off, the gameplay is so much more interesting – larger levels means more space for varied and challenging puzzles. The difficulty is set just below 'frustrating', so you'll probably have to replay a few stages until you get your timing right, but it isn't nearly hard enough to make you want to give up. High difficulty and fiddly mechanics can spoil a platformer, but in this case, everything seems to be calibrated just right. It's great to see such a successful sequel, one that doesn't deliver more of the same, but steps up its game and reaches its full potential.

The moving platforms do not reset themselves or can't be retriggered if you die and return to your last checkpoint meaning you have to restart the whole level.

I have seen this now on the first bonus "gravity" level and on level 6.

Is this a bug or intended or am I just missing a trick.

@yaddab
I played through both levels again to make sure, and every time I died, the platforms reset to their original positions, so it looks like a bug. I'll alert the devs!

Same problem here with the platforms. They actually do reset their positions, but the trigger remains red and will not start them in motion.

I've contacted the devs, they say they're aware of the bug and are working on it.

Another bug, in the "Rocket" bonus level: If you get to the end and hop out of the rocket, but then for some reason head back and kill yourself on the traps, you'll respawn back at the previous checkpoint, but without the rocket, and so there's no way to get back to the exit again.

Hi guys i am member of FlashRush Games team. First of all thanks for bug report. We have fixed bug with platforms in "warp zone 1". Also we have fixed other small bugs with checkpoints. @GeerBox - thanks, we have not seen this problem before, we will work on this today.

Still bugged for me on the first warp zone.

I played through al of the regular levels without any problems though.

@yaddab
We just have sent new fixed version to editors, hope they will update the game soon.

The new version of the game with the bugs fixed has been uploaded.

There's a brief but horrifying animated torture sequence in the game's intro. If anyone finds that distressing (as I do!) I'd suggest clicking the "skip" button.