The first time you start up Transistor, the new indie action RPG from Bastion creators Supergiant Games, you're going to be confused. But that's okay, because you're also going to be awed, excited, and immediately hooked by this neon-soaked world of cybernetic mysteries. You control Red, a beautiful but silent woman wielding a massive sword that seems to have a mind of its own and provides direction. That's the Transistor, and you'll soon realize exactly why everyone wants to get their hands on it when you get a taste of the power it can wield. You won't immediately know why she's fleeing through the streets, what the bodies you find mean, or what the electronic horrors are pursuing you for, but once you get a taste of it, you're going to want to find out. With fast-paced combat that allows you to freeze time and chain strategic moves for powerful combo effects, a compelling narrative that opens organically as you play, and the stunning visual and aural presentations you've come to expect, Transistor is one powerhouse of a game. 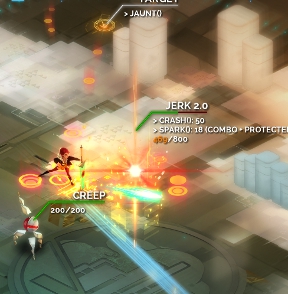 The meat and potatoes of Transistor comes down to the combat, which takes a step away from Bastion's breakneck pace by injecting much more strategy into its encounters. Instead of simply stabbing things repeatedly, your actions are limited to the special abilities or "Functions" you can slot in your quick use bar at the bottom of the screen, and while you can use them as you please, for most battles you have to use a lot more tactical planning. Hitting the [spacebar] temporarily allows you to enter a planning stage where you can literally plot a path and chain up a series of attacks around the map, as long as you have enough room for them on your action bar. As soon as you exit this mode, all of your actions will trigger in order, but you'll need to wait for it to recharge before you can use it again, which leaves you vulnerable. If your hitpoint bar is completely depleted, you won't die right away... instead, you'll find access to one of your Functions disabled, allowing you to fight on, though potentially extremely handicapped. If you die for realsies, you'll be teleported to the last Access Point you used. The backdoor hub or "Sandbox" you gain access to later on serves essentially the same function as Bastion's central area, even down to the little critters running around.

As you level up from defeating enemies, you earn Functions you can slot in as either active abilities, or upgrades to others. Used directly, for instance, Mask temporarily turns you invisible, but applied as an upgrade, it increases any backstabbing damage done to enemies facing away from you. Later in the game, you'll gain access to Limiters, and even more configuration options when Functions can be used for passive bonuses. These Functions aren't just for laying a beatdown, however. As you use them, you'll decrypt data about not only Red herself, but other people in the world. Trying different upgrade combinations likewise unlocks even more of the data, so juggling your Functions around is good both in and out of combat. As for anything else out of combat, well, don't expect much. The story drives you from place to place, and you'll rarely get a moment to breathe that isn't filled with dodging enemy fire. This is a game driven by violence, and rather than your typical RPG exploring and chatting with folk, here you'll learn more about the story simply as you fight your way from place to place, piecing together what happened and why. 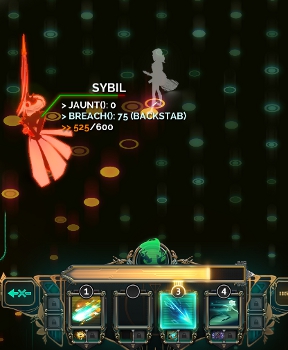 Speaking of the "why", that's a long time in coming. Transistor begins so abruptly that I thought I might have missed an expository cutscene, and it wasn't until nearly an hour later that I finally had a better grasp of the plot, which is considerably more complex than Bastion's. Not to belittle that gorgeous emotional voyage, of course, but Transistor is all about twists and betrayals and big revelations that keep you guessing the entire way. At its core, Transistor is a story about people, privilege, and power, and realizing that power doesn't always mean money or political influence. That its hero is not only a woman, but a hero for who she is beyond simply being good with her sword, is incredibly gratifying. Though she doesn't speak, the more you learn about her through the story pieces you unlock and the one-sided conversations the Transistor carries on "with" her, you learn a lot about the type of person she is. After all, actions speak louder than words, appropriately enough, and Transistor is all about having the courage to act even when faced with impossible odds.

With virtually everything about Transistor's gameplay coming down to combat, it's a good thing it feels so intelligent. Treating the game like a typical action-RPG will usually get you killed in a hurry, putting the emphasis on learning not only an enemy's attacks and weaknesses, but the way different enemies interact with each other, and figuring out the best possible use of your equipped Functions to take them down. The amount of combinations you can make by tying Functions together as upgrades is as impressive as it is varied, allowing you to drastically change your fighting style just by swapping things around a little. It's just too bad that your user interface for doing so feels so clunky and awkward for no particularly good reason. You have to click through different screens for each function to assign them to the slots you want, when it feels like something that could have been accomplished a lot quicker and cleaner in one single menu. It's odd compared to the rest of the gameplay, which feels so fluid and natural. Admittedly, you can expect the game to feel a little repetitive after a while. When all you really have is the combat, battles that drag on with multi-stage enemies or shields that need to be broken or spawners that need to be disabled... well, they don't come across as rewarding as other encounters.

It goes without saying that Transistor is beautiful, and from the art to the lighting effects everything drips with decadent detail. Since the Transistor is really the only one who speaks, he fills the same role as the narrator from Bastion, but acts as an altogether more dynamic character and force than a simple passive observer. The music here is dreamy and electronic, less in your face but perfectly suited for every environment and situation. Though some players might be put off by the abstract way it tells its story, its smart combat and myriad of customisation options for your abilities makes Transistor stand head and shoulders above most competition in the genre. It'll keep you busy for a long time, and with its deep, compelling combat and stunning visuals, you'll love every moment of it.

Just and FYI, this title is also available on the PS4. I can heartily recommend it. The music is wondrous, the graphics are stylish and the game play is flawless.

Any idea how long the gameplay is? I know there's a certain amount of replayability. Just looking for an estimate. Thanks!

Hi gorgeousplanet! That's sort of hard for me to say since my playing process is different from your average gamer. I'm forever stopping to take notes, write, re-write, screenshot, etc, so just because I might take (for example) 12 hours to play through a game doesn't mean all that time was spent playing. I would say for this one, not taking New Game+ mode into consideration, if you're aiming for completion of the main game, anywhere from eight hours and up?

I've seen most people say that they've completed their first playthrough of the game in about eight hours or more, to help confirm.

I just purchased the game yesterday and it's been amazing so far. Not quite as fresh as Bastion was, but it's still a joy to play.

Thanks for the replies!

fantastic game! Played it and finished in single day. The characters are loveable and I like how they depict the villians instead the common 'villains are evil'.

Trying new functions combo is exciting especially toward endgame when you got a few super destructive skills and training ground sandbox. The learning curve is nice that at first you can play without planning mode but the more you progress the more you have to make use of creating combos and use planning mode. Last boss is a pain tho, since most time I die it took my ultra-damage function >.

Wait, unlocking function stories is by changing its placement and use it on battle? I was thought.. just use them xD ..