As gas prices continue to rise, preserving fuel is an issue that's on almost everyone's mind. In response, YoAmbulante has created Traffic Wonder, a game built around the concept of finding the most efficient routes possible to save that precious flammable liquid we all depend on! 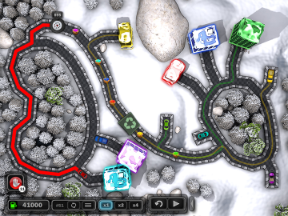 Each level begins with a screen full of roads, buildings, and cars. Your job is to draw paths for the cars to take so you can match them up with buildings of the same color. It's not about finding the shortest route, however. Cars can collide with each other if they cross paths, so you need to watch their direction and location to make sure no fenders get bent out of shape. Until you get the hang of the timing, you'll probably see more crashes than successful trips! Later in the game more features are unlocked, such as stop signs that can halt cars or vehicles that travel at different speeds.

Traffic Wonder certainly isn't the first game to utilize directing traffic as a gameplay mechanism, but it's implemented very well and allows you to plot out paths ahead of time instead of jumping to do everything on the spot. This gives it a distinctly puzzle sort of slant, which becomes even more apparent when you factor in having to monitor fuel usage. A great mobile game that walks a smart line between genres so it can please twice as many players!

NOTE: This game was played and reviewed on a Motorla Atrix. Game was available in the North American market at the time of publication, but may not be available in other territories. Please see individual app market pages for purchasing info.