Ah, the sea! Bracing wind raking fingers through your hair! Sunlight refracting off the waves like a thousand priceless gems! And — what's that? OH MY GOD, IT'S A KRAKEN! Poseidon, save your poor, wretched disciple! Wait! What's that, off the port bow? Is it . . . is it help? . . . no! Pirates! And now they're shooting my flesh! They're filling it full of arrows! My hate for them is like a thousand angry suns! Merciful Zeus, why?! The sea is terrifying! Thank goodness you get to experience all the wonder of ancient Greece and fierce naval battles from behind the safety of your monitor in this latest installment in the Tradewinds series from Sandlot Games, Tradewinds: Odyssey. Now with 60% more harpy attack! Huzzah! 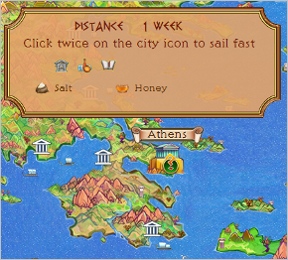 Odyssey is huge. Featuring a total of six heroes to play as, two of which are only available after completing the game once, and each with his or her own story to follow, it's ambitious to say the least. The game takes entire stories, places, and people from Greek history and mythology, and turns them all slightly askew by dousing them heavily in a modern sense of humour. A varied cast of heroes to choose from including a bitter priestess, a minotaur, and "Phil" means a different story each time you play a new game.

One of the first things you'll notice is how lovely Odyssey is, sporting some really gorgeous art-nouveau character designs and luscious colours. Even the cities make me think Greece was perpetually painted in a flattering, pre-dawn light, which is good, because you'll spend a lot of time in them. The cities are where you'll buy the items you need to trade or sacrifice your blessings, do most of your questing, and, most importantly, take care of and buy your ships.

Once you leave the city, you'll find yourself on the overland map, where blue question marks direct you to side quests, and orange ones mark your main quest. While you're sailing to-and-fro, you're going to get closely acquainted with hordes of pirates. You can choose to run from the battle if you like, but if you fight and win, you'll be rewarded with not only valuable drachma, but whatever items the enemies were carrying. Battle is also so straight forward that even novices will be able to fight without fear. Simply tapping the sword button at the bottom of the screen either pauses or resumes the battle, and blessings can be activated by hitting the appropriate icon. While you can direct your ships to fire on specific targets, they often do well enough on their own that you can leave them to act independently as long as you monitor their health. If they sink, don't worry. New ones are always available for purchase.

Finishing the game not only unlocks two additional characters, it also enables Free Trade mode, where you can feel free to sail and roll in drachma to your heart's content. Add in the numerous accomplishments you can net yourself alongside the six main campaigns, and you've got a winning title that's impressive on replayability. 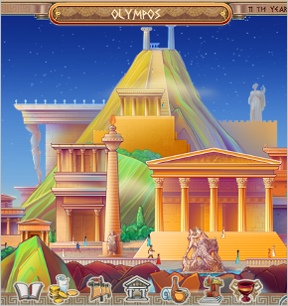 Analysis: Odyssey offers a lot in the way of trading — as the title of the series would imply — but I'm sorry to say I barely touched it my first play through. By becoming the scourge of naval ne'er-do-wells, I was able to make roughly enough drachma to plate my entire armada in gold, and still have enough left to build a money bin to shame Scrooge McDuck. This isn't a complaint. I'm actually impressed that there's enough elbow room in the game for you to find some way to make gold that fits your playstyle, so if you prefer to avoid all but story-related combat, you can still make a living selling honey to Athens, even if it proceeds at a more sedate pace.

Which is nice, because honestly, given how little flesh is wrapped around the bones of the combat, it's good to have other opportunities. My main strategy consisted of hitting the button to start combat, and then air-guitaring while my troops and the enemy began the time-honoured tradition of filling each other's faces with arrows. And 90% of the time, it is always arrows. It gets a little tedious when all I'm called on to do is hit the button to cast a healing blessing once in a while. There's no real strategy to speak of, since the entire thing basically boils down to one big endurance contest.

Because you never actually get to make a decision in any of the quests, your input is limited in sailing the ship where it wants to go, killing any enemies (with arrows), and collecting a reward. It never stops being fun, but there are times when the main story feels more like an interactive visual novel, minus most of the interactive bits. Even adding one or two choices to the outcomes of some of the sidequests or the main story would have gone a long way towards really fleshing out the gameplay and made this a fantastic game instead of just really, really good.

While I ran through the game initially with Phoebe, it was Petrakles with his petulant declaration of "But pants chafe!" who won my heart. I looked forward to every conversation I had in the game. Despite dropping a few awkward potty jokes, Odyssey is, for the most part, pretty funny. If you're looking for a serious, sweeping epic of a story, you'll need to keep looking, because Odyssey is a game that spends all day oiling it's pecs and wants you to tell it how pretty it is. Go in with the right mindset and it will treat you right for a long time. Offering wit, diverse gameplay, and a ton of reasons to replay it, Odyssey manages to overcome it's balance issues to become a title I have no problem recommending.

Tradewinds: Odyssey is available to download from these affiliates:

Hmm.. Seems interesting. What are the level spans on these? I hate it when they drag on.

Sorry Andrew, are you asking about the stories? There are no levels in this game, just quests. Each character's main quest can probably be powered through in a few hours, less if you know what you're doing and have some sort of strategy on hand to get your cash and ships. It really depends on your playstyle, and whether you're going to explore everything or not.

The first time through I played as Phoebe and it probably took me about four hours of on-and-off play time. Keep in mind this was pursuing all the sidequests too.

Did that answer your question?

Kinda reminds me of the DOS game "the patrician" only that one was much greater.

Looks like a decent game, but not something I'd spend 10$ on tough.

I am so disappointed in this game. It's plodding. The transition from a city to sailing takes FOREVER. What's the purpose of showing three slow screens before even showing the fleet sailing?

The fights are also extremely boring. They are slow, and when it's raining, you can barely see anything.

The map is so busy that it's difficult to find the cities.

Apparently, they made Tradewinds Caravans and decided to coast.

If your transitions are slow, it probably means you have an older computer, older graphics card, or older processor that just can't keep up. If you do not have the patience to wait on your computer, buy a new computer. Do not blame it on the game. I have a Optiplex quad core computer and the game runs perfectly. The only Tradewinds installment I didn't particularly like was the caravan one. I like the sea battles.

hi..how do i know which city will confiscate what kind of item in which city?

I downloaded a demo from Arcade Town, but for some reason it gave me the full version for free. The game itself is not that good, and not funny at all, however much the writers try to make puns out of "Anaximander".

Tradewinds Legends was much better. A lot more exciting farther in too.