There's been a murder! Yes, one of your simple, salt-of-the-earth kinfolk bit the big one last night and it's up to you all to find out who's responsible and bring him to justice. The problem? It could be your friend, or your neighbor, or the milkman, or the local drunk. This is how BlankMediaGames' new indie multiplayer strategy/puzzle title keeps the suspense ramping up. Town of Salem, free in your browser or as a paid indie download via Steam, is an electronic update of the popular "Werewolf/Mafia" party game, featuring cute little pilgrims trying to out-witchhunt each other while keeping their own sorry hides above suspicion. By day you bicker and argue with each other, hurling accusations in the chat box, trying to determine who's been doing the killings and put them on the gallows to stand trial by their peers. By night, you huddle in fear, waiting to see if you're on someone's hit list. Or maybe YOU are the one who's on the prowl, and you need to do some killing of your own. Things are about to get messy in Salem, that's for sure. 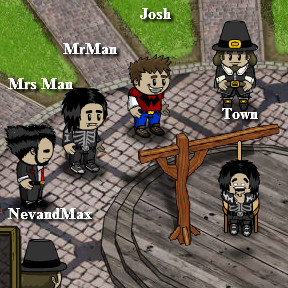 There's an appealing simplicity to Salem's basic gameplay. At the start of each game you get a "role" that defines your abilities and goals. You could be a Medium who can communicate with dead players, or a Sheriff who can conduct investigations. Some roles, like the Jailor, give you the ability to take the law into your own hands and execute players you think are guilty without a public trial. You could also be a Mafia member or a Serial Killer, who's goal is to kill the innocent and spread discord during the day. This can create some truly compelling multiplayer drama as each day dawns on a new pile of bodies and some fresh accusations for the dwindling alive. Nothing's quite as thrilling (or frustrating) as finding yourself on the gallows, pleading your case with a noose being tightened around your neck. And watching a rival player getting strung up can be deviously satisfying, especially if it was your testimony that put them there.

Town of Salem balances out all this horror with some adorable visuals and engaging music. Your character is customizable in every respect: you can change clothes and genders, add pets, new houses, and even death animations. The game has virtually no load times so you can jump right into the action as soon as you've signed up for an account. Like all multiplayer games, you do occasionally have to cope with trolls and cheats who want to wreck the fun for everyone. But Salem has a fun community for the most part, and most games are wonderfully entertaining even if you don't want up alive at the end of the day. This is a game that relies on player interaction and role play, not fast reflexes, and it requires a keen deductive mind and at least some ability to be sociable. So check out Town of Salem and get ready for some blood.

I know that JiG wants to earn royalities, but honestly keeping secret there is a free browser version too is kinda... well.

Just go there to play it:
http://blankmediagames.com/
If you like you can still get the steam version.

Yes its an awesome game.

I always aws found of mafia games, despite some small issues its very good overall.

Yeah, it's not an affiliate link. They're not getting "revenue" from it.

Sorry... but yeah, I feel that you guys should have linked to the web version first. THEN link to the steam version if that was the author's / revenue intention.

Hello! We're not trying to "earn royalties" on anything. :) As you can see by the lack of an affiliate tag, we get zero revenue for any sales through Steam, so we would appreciate not telling people we omitted the link to earn money. We linked to this version because it was the one the reviewer found for himself, enjoyed, and bought. I'll be happy to update the links to the free version. I just personally wasn't aware it existed.

Thanks, Dora! Now everyone can enjoy the game without first going to the comment section.

It's sad that we just need 2 more votes for a rating to show. Vote, people!