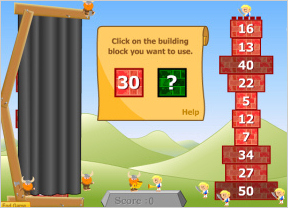 If you've been losing sleep at night because you're dying for an online version of the card game Rack-O, then prepare yourself for a good night's rest. Tower Blaster to the rescue!

You're in a race against the Viking hordes in a randomly-assorted tower of numbered blocks, and must arrange them in order from lowest at the top to highest at the bottom. The size of the blocks gives you a visual cue as well, since the higher-numbered blocks are larger and hence should be at the base. Finish your tower before your opponent finishes theirs, else the mighty Viking Axe destroys your own tower and the game is over.

Each turn you either take the numbered block that's presented to you and use it to replace one in your tower, or chance it by taking the top face-down block and either using it once it's revealed or discarding it and losing your turn. Replacing a block with what you are given is the only option in this game, you cannot move blocks around in your tower. An extremely tall curtain (!) blocks your view of your opponents tower, so you're never quite sure how far along they are. Oh they'll tell you that they're almost done, but they lie!

The game starts out with a range of blocks numbered from 1 to 50, then reduces that range as you progress through each of the eight levels. Be the first to properly arrange your tower's structure and watch your happy little squad destroy the Viking tower with a cannon blast! You can also score bonus points in each round by placing sequentially numbered blocks adjacent to one another.

Analysis: Tower Blaster is a very polished game with classic gameplay, and its few number of levels ensures that you play just long enough to enjoy yourself without getting too sick of the cutesy voices of your tiny "army".

One could always spice up the basic formula with "special" blocks that have different effects, or playing against different opponents with different skills (the downloadable version actually offers this feature), but the game as it stands is a solid, short, and sweet online diversion that doesn't disappoint.

This is fun. I need to get my kids playing it with me!!

Although it's a little embarrasing to have a coworking walk in and see me playing a game like this.

Yes, despite the cutesy, childish appearance, this game is great fun. I love it! =)

Very nice game .. too bad im horrible at it .. I even lost to the cavemen who actually run into my tower head first and destroy it

Oh, forget it. For once I have to be blatant and say that I just don't like the game. It reminds me too much of Blue's Clues, or something, and it's just not working for me. Sorry -MANAX

I just realized this, but

it is possible to know the exact state of the opponent's tower. Just open a text editor or something and write down the order of the numbers in the opponent's tower at the start. Then as you go through, you'll be able to see which number block they pick and where they put it, allowing you to keep tabs on their tower throughout the round.

The game gets a lot more strategic when

you use the tip I gave in the previous comment. I just had a game where my opponent had a 22 at the base and a 20 at the third from bottom (in the level where the blocks go up to 22; last level, I think). Since there's only one block of each number, I could hold the 21 and force the opponent to make more fundamental changes to his tower because he could never get the 21. Similarly, when I saw my opponent had a 1 in the second-from-top and a 4 in the third-from-top, I held the 2 and 3 in my tower so he couldn't finish the top of his tower either, without changing some of the blocks underneath the 4.

haha, I almost applied for casual gameplay and wrote this up for a review to send in for my application and didn't end up applying, but if I had applied this would've been up a lot sooner.

Very good find "dancemonkey". Racko is fun, the only way this could be improved is with a multi-player online version because the computer or atleast the web version's computer is far too easy to beat.

For some reason I think this game was posted before.

Luckdragon - it appeared in one of our link dumps but totally deserved a proper review. =)

Does the downloaded version work? I downloaded it and installed it, but when I click the "Play trial version," it does nothing. The purchase link does work however. Is it just happening on my computer?

I downloaded the trial, and I'm a bit disappointed that it's so...what's the word? Sparse? For $20 I would think there would be a bit more to the gameplay. It's a bit frustrating when you work your way up through the levels, only to get an opponent who only needs 2 blocks to win. I wish there was a "start at level..." option for the quest mode. Oh...and it took away about 30 minutes of my 60 minute trial. Oh, well.

I really like this game, I actually downloaded it a few years back, although $20 is a bit pricey for me to actually buy it. I always feel like people who make games like this would make significantly more money if they sold the full versions of their games for $2-$3, I mean does anyone actually spend $20 to buy the full version?

The one thing that really disappointed me though was

I finally beat all eight levels and there was no ending, nothing. I wasn't expecting anything spectacular, but he could at least had the little Israelites (I'm assuming that's what they are) jumping up and down and saying congratulations or something.

Yeah, I also beat it, and all it does it gives you a message "Congratulations, you won all eight levels".

The blonde dudes weren't even particularly happy about it.

Btw, was anybody else reminded of the Lost Cities board/card game?

I ponder how the maths would look like for an ideal strategy....

The simplest I can think of is trying to put the brick in the relative position of the number span. For isntance, if you draw 20, and the numbers are 1-50, and the tower is ten bricks high, you put the 20 at the 3rd or 4th position (depending on the existing bricks). This will slightly nudge the probability odds to your side.

However, this strategy doesn't take into account the oponnent and his actions, which I think are quite important if you want to get REALLY technical.

awesome game, finished it in my first shot

Yes thats pretty much the same I came up with.
Its also the most complicated I can do ;-)

Wow this game is ancient but fun nonetheless.

I never was very good at it.

There used to be a head to head version of this on myspace and it was way better than this standalone version. I wish they'd bring it back :(

I'm a little depressed at the ending.

It basically said, "Congratulations! You beat all eight levels! Here is your score."

I've found it beneficial to use a calculator to figure out what the range of each block should be. For example, if it went from 1 to 30 you would want to put a 14, 15, or a 16 in the fifth spot.

That's a good one.

I found it kinda frustrating when I started playing, but i managed to finish it :) 42,476 points

I know this is an old listing, but the link to the game no longer works.

I love the "you can do it, you can do it"! I saved the sound and listen to it all the time!

Thank you, Jay, for including this addictive little game in a recent Vault. Using all strategies above (especially an Excel notepad) I finally finished, although not with quite as good a score as Armando's. For what it's worth, the only strategy I came up with was:

if you really want to win the game, forget about trying for a high score; just get those numbers in order as quickly as you can.