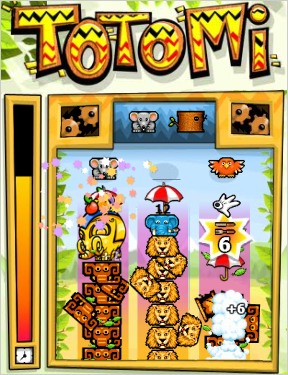 Lions and Hippos and Bears, oh my! In Rovio Mobile's Totomi, build stacks of animals into totems as high as you can. Combine identical animals along with their favorite food and they begin to breed, multiplying their number and pushing your totem even higher. Each animal interacts differently with others, so learning their relationships is key to creating massive stacks of animals.

The game starts out extremely simple: stack some zebras and feed them some leaves. Before long the list of animals grows and their interactions become more complicated. What happens when a lion meets a beaver? Will an elephant eat fish? What's the relationship between wood and a zebra? You'll eventually have to track these relationships on a massive scale!

Detailed instructions are provided before the game begins, telling you about each combination or interaction, which animals breed, which are friends, and a corresponding visual symbol for each to help you organize your totems. Signs like hearts stand for friends, baby bottles for breeding, knife and fork for food, and a plus sign for a non-matching animal that can capture your stack for points. Simply drag and hold animals over a column to see how they'll interact with what's already there. The totems will start to shake when your time for the level is running out, so capture a stack to keep going!

Analysis: This game has an odd combination of being very simple and complicated at the same time. But this might be the key to its playability. It takes a while to pick up what all the different symbols mean, but once you get that down and have up to 12 animals to manage it gets more challenging and fun. Totomi has a snazzy soundtrack, smooth and polished gameplay and cute visuals. When you capture a really big stack there is a visual circus on the screen. Make sure to give it a chance past the first couple of levels, as once you get into the swing of things the fun really kicks in.

Thanks to Irina for suggesting it! :)

Wow, this game seemed so easy at first then got hectic very quickly. Going to practice a little with it ;)

wow I am first on the high scores list name: winner (score 4510)

If you check out web high score you'll notice 4510 is a pretty poor score. There a video about how to score in Totomi on you tube at http://www.youtube.com/watch?v=ZYbmMYcf1R8
check it out he scores 282516 points

Maybe this game is just not my thing but I couldnt understand what was going on most of the time... and then suddenly it was over..?

(I even took the time to read through all the instructions - most unlike me!)

Far too hectic for my taste to enjoy it.

I really like this game. It might seem a little un-original at first, but it features a really unique mechanic in my opinion. And there are suprisingly many combinations available and such. Ontop of that the graphics are really cute aswell.

Agree with not really getting the point of this even after reading the instructions.

How come lions will eat beavers and zebras, but not fish?