Dudes and dudettes! Something totally untublar is happening down at The Galaxy Castle. Some kinda gnarly video virus has zapped its way into the computers arcade cabinet game things and making them act all bogus. Only one hero can make things rad again: Joystick Johnny! But will Johnny's mad skills be enough to save the Totally Tiny Arcade from utter destruction? Only you know for sure! Totally Tiny Arcade is a fun mega-remix of rapidfire retro arcade classics originally released by Joe Lesko's Flea Circus Games in 2007. However, it has just been released as freeware, and if you missed it the first time around (as a lot of people seemed to), this is the perfect time to jump in and prove who's king of the button-mashers! 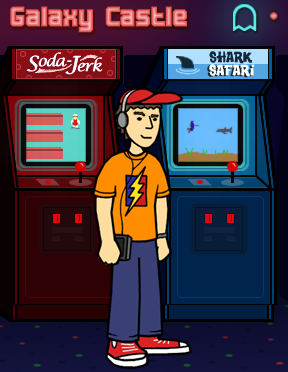 Though there are several versions of the arcade to play through, the general goal remains the same: you must complete three rows of arcade games before time runs out, then face off against the video virus in a final showdown. Each row contains different games, and you must beat four of them to force the virus into the next row. On the first game you choose, you must beat one level, the second game will require two levels, the third game three levels, and the fourth will require fourth, including the special bonus virus level. Each row may have another unwitting arcader taking up space on the game you want to play, but you can announce that you "get next" by marking the occupied machine, though doing so requires that it must be the next game you play, by the unspoken rules of the arcade.

The games run the gamut of re-creations, parodies, facsimiles, reinterpretations, and fun new concepts. Generally, you beat each one by either destroying all enemies or filling up the progress bar at the top of the screen. You are racing the clock, however: every life you lose chips away at your timer, and once it runs out, one more mistake means game over. Each of the three arcades has a different mix of games, but whether you're chomping coins in Stoc Man, bonking heads in Clown's Revenge, or slaying dragons in Ninja 1999, you'll use the [WASD] or [arrow keys] to move, and [Spacebar]. [Ctrl], or [Enter] to fire. Finishing a game without losing a life means bonus points. Special items appear in the second and third levels of each game, and collecting five in a row without losing a life means big points. Once you've completed enough games, you'll be taken to the arcade's secret room, where you'll play the experimental prototype game that will show that digital dummy who's the bossest! 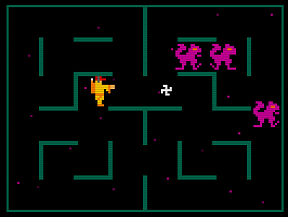 Totally Tiny Arcade manages to mix its enjoyable arcade fun with a ton of nostalgia and a punchy sense of humor, making for a nice trip to the old-school. Most of the minigames it offers should be pleasantly familiar to retro game fanatics. While more explicit instruction might have been helpful on the more obscure references (such as Astro Terrestrial, a strangely enjoyable riff on the infamous Atari 2600 ET title), none are so impenetrable as to not be master-able after a few tries. One not-so-great aspect is the occasional appearance of Johnny's girlfriend(?) who's only purpose is to "helpfully" point out aspects of the game he's playing in an annoying voice while obscuring the screen. The fact that this is the main female presence in the game makes one long for a "Joystick Jenny" option. Still, is Totally Tiny Arcade is a smart little title that makes the most of its clever premise? Fer sure!

I can't believe that this is more popular! It's such a good little indie gem that needs to be shown to the world!

In level 2, touch the robot wandering around with blue socks.

In level 2, touch the human on the ground who has the book in his hands.

in level 2, throw a football at the band member that crosses the screen.

Touch the truck that has bacon shown on the side of it in level 2.

In level 3, there will be a flying man blocking your attacks, keep hitting him with the cassettes until a blue one falls out.

Touch the customer who's holding the swirly straw in level 2.

In the bottom left corner in level one, there will be a grey pixel next to a hole

In the bottom right corner of level 2, a hobbit will enter from the right side of the screen, blow him up before he retreats back to the right.

After blowing up a whole pizza in level 2, grab the slice of pizza which has the mushroom.

In level 4, (the virus boss level) allow the first truck to throw 3 chickens at you, the 4th will have a blue hat and cane.

Grab the golden rectangle that the baddies shoot at you in level 1.

In level 2 or 3, there will be a man on an island without a spear, run into that island to claim Sweden.

This is a tricky one in which you might need to unlock the dollar arcade in order to achieve. In the first level, there is a bowling bag at the bottom right of the screen, it can only be acquired by hitting a pin into it from the correct angle.

Stay to the left in level 2 and run into the falling snowball which has the penguin in it.

The third or forth giant robot that appears in level 3 will be wearing a beanie cap,

In level 2 or 3, you must pop a clowns balloon over a lion, if the lion eats him, his red nose will fall off for you to collect.

In level 2, on the left side of the screen, the brown corner to a chocolate bar is sticking out of the ground for you to collect.

Notice the words that surround the game within the boarder. After several seconds in level 2, the words "Psst" will appear by the right hand gate. You must enter the right gate before the "Psst" disappears.

In level 2 or 3, at the bottom right corner of the screen, there will be a bunch off orange dots that enter the screen, catch them before they exit back off to the right.

In the bottom right corner of level 3, shoot the wall to acquire the space bees. (glowing dots in the wall.)

Run into the cop car in level 1 that has purple fuzzy dice hanging in it's window.

This one requires an easter egg. Once per game, if you wait long enough in front of a game before you select it, you will grow old and eventually die. You will come back as a ghost and be immortal for 1 arcade game. In level 2 of Basement and Bad Guys, you can go through the wall and collect the green dot on the left side of the screen.

in level 3, there will be a slightly different blue ameba with a large green dot in it for you to collect.

In level 4, a grey half dome will appear at the top of the screen. Be quick for it will head from the right side of the screen to the left.

There is a hole in the bottom wall just left of where you start, head through it to collect your last treasure.

*That this isn't more popular*

I agree, Ruesiken. While it's very hard to complete, that is how arcade games should be. And most of the games are great fun.

Obviously the games are copies of famous arcade games, but I actually only recognize a few of them. Can someone compile a list of the real arcade game behind all those in the game?

Also, some corrections for the treasure walkthrough:

The Spy Hunter game is actually called Car Hunter, and it's the 5th, not the 4th chicken that will have blue clothes.

As for Miami Heist, the cars do not have pink dice in Level 1, you have to make a car drive over the reef (or whatever it is) that you can put on the road with Space, then once it's driving again you can run into it for the treasure.