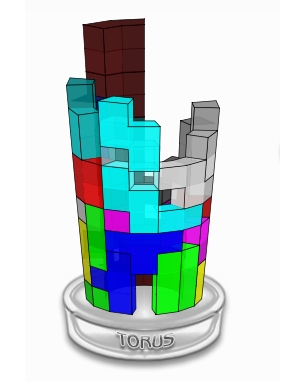 Imagine for a moment that you're in Missouri, and you're playing a game of Tetris. Then, imagine that you're still playing Tetris, but you're somewhere other than Missouri. That's the feeling you'll get when you play Torus, a Tetris-based game by Ben Joffe. Instead of stacking and eliminating bricks on a flat surface, you're now building a cylindrical tower of blocks, because Dorothy, you're not in Missouri anymo—shoot, it's Kansas, isn't it?

Rather than moving your piece back and forth, Torus is played by rotating the ring-shaped base that your piece will fall upon. The [left] and [right] arrow keys rotate the base, while the [up] and [space] keys rotate the piece, and the [down] keys drop the piece faster ([WASD] can be used as an alternative). As in "old-fashioned" Tetris, your goal is to drop pieces that form complete lines, which are removed from play. Unlike old-fashioned Tetris, Torus likes to sneak in irregularly-shaped pieces, like the tetrominoes you're used to with an extra or missing -omino. Traditional mode lets you play at increasing speeds until you reach the top of the level. Time Attact [sic] mode challenges you to score as many points as you can in three minutes, and Garbage mode requires you to reduce the random stack of blocks to a height of three as quickly as possible.

While it's missing some bells and whistles (like sound effects, namely bells and whistles), and the name might be a bit of a misnomer (wouldn't true toroid Tetris wrap from bottom to top?), Torus makes use of Javascript and the Canvas element of HTML5, the next version of the venerable HTML that is the foundation of the Web. Unfortunately, HTML5 isn't yet supported by all the browsers, but it will be very soon (so upgrade your browser if you're still using an old one!). While making a step into the future(!) of gaming, Torus pays homage to a classic with its own unique twist.

I think the lack of an edge makes it easier.

Good twist, but where is the challenge?

"Woe to those who call toroidal Tetris 'Tetrisphere' and cylindrical Tetris 'Torus'." -Isaiah 5:20

Wait a minute, isn't this...? Yep, same Torus Joffe release 4 years ago, but now all shiny and HTML5ish. Awesome.

I like this. The only problem is the random non-tetris pieces that I would get. I actually don't entirely hate them, but they are the same color as the normal pieces, so when I am concentrating on the cylinder and just seeing the piece based on color, I make mistakes or am surprised more often.

Interestingly, since it's coded in HTML5, the iPad loads this game in Safari, but since there's no interface to control the movement of pieces, you can't do anything. :P

The game is old, but pretty entertaining.

It looks lovely and plays well. The extra gameplay modes are definitely needed to create a challenge

Garbage would be the most interesting mode to me, but I absolutely hate not being able to see the columns on the back of the cylinder. Why are they invisible in that mode, but not the others?

does anyone else ewxperience exteme lag when playing this game? and I mean the old dull version.

Missouri, home to a large swath of the Ozark Mountains, is one of the most topographically diverse states in the Midwest. Kansas is of course proverbial in its flatness and, as it turns out, is "considerably flatter than a pancake."

Also, nice game! Though I object slightly to the purity of the Tetris set being sullied by shapes of three or five blocks.

And that random, malevolent 1-piece! o_o

HRUMPF!
1-pieces that goes inside closed holes.. and a bit lagy when at top, nice looking at least.

Seems easier than normal Tetris, but is just as addictive... And so I must stop myself.

& millions of years later, as if from the eocene to the pleistocene, it's still great. still needs music though.