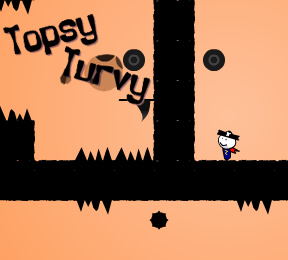 I've believed that the Earth revolves around me for a very long time. Topsy Turvy is the first game that has told me that I'm right.

Made by Mint and Codeheads, Topsy Turvy is a game in the proud, recent tradition of platformers with a twist. Like others in the genre, Topsy Turvy is focused around simple, familiar mechanics: use the [arrow] keys to move left, right, and jump, avoid enemies and spikes, and get to the goal at the end. We all know how to play that game, right? Well, Topsy Turvy says, now gravity is relative. Chew on that.

Whenever your cute, customizable avatar approaches a drop-off, instead of falling into a bottomless pit a la Mario, the entire topography of the level rotates 90 degrees. Suddenly the walls are the floor, the floor is the walls, and the ceiling... well, there isn't one anymore. Spikes that were formerly easy to avoid are suddenly obstacles in your path to the coveted flag, what used to be a safe walk has now turned into an ominous precipice, and so on. Topsy Turvy's 30 levels are all variations on the theme of variable gravity.

It's fun to play, and surprisingly varied as well. I've always liked games like this, where a new element is introduced into the traditional model of platforming. The best games always seem to encourage experimentation, sometimes even making you believe you've found a new way to accomplish an old level. Topsy Turvy is definitely one of these.

Unfortunately, it too has its problems. While its minimalist art style is readable and charming enough, I ran into a few problems with collision detection. During the course of the game your little avatar will fly about the landscape as the gravity shifts radically. Timing is very important in a lot of puzzles, as there are moving obstacles added into the mix in the late game. However, I kept running into problems where I'd do a running jump, but somehow catch the edge of the spikes' collision block. This happened while I was falling past them, while I was flying by them, and in one notable instance, when I ran into them from underneath. Even still, this wouldn't be much of a problem except that the game counts your deaths in big letters on the top screen. This was especially frustrating the few times that my right arrow key seemed to stick (as sometimes happens when you take focus away from Flash games) and I ran into the same spikes again and again, watching the death total count rise dramatically. You get used to it after a while.

Despite its problems, Topsy Turvy had me spellbound. Each level follows the previous one immediately, so it came to pass that I started at level 1 and didn't look up until level 26. If you liked Portal, Braid, or Gish, you'll like Topsy Turvy.

Nice and sweet. Sort of a less polished, non-iPhone-based version of Soosiz.

I knew it...I knew there would be another platformer...everyone's decided they know the way to show their new and different ideas: PLATFORM IT! And each and every one of them thinks their idea is BRILLIANT! Arrgh.

Still, I'm playing it. What, you've never seen a hypocrite before?

Nice little game, but I thought the concept was executed better in Mindscape.

How do you unlock the Rolling In It achievement? I have all the other ones.

Kind of a less-impressive version of Roll Away for the original PlayStation. Anyone else play that? Good stuff, good stuff.

Pretty fun, but I don't think I'll finish it. The collision clarity doesn't make it quite fun enough.

The "costumes" slider is silly, because it changes e.g. eyes for some costumes but not for others. So you're stuck with pirate eyes until you change them manually.

Here's something I found out with the character:

If you use the droopier hair style with the eyes right after the angry eye and the frown as a mouth, you're character really fits the mood of the game!

Reminds me of Kula World on the original playstation :)

About the bonus levels...

They actually unlock as soon as you've unlocked level 25... so you don't have to finish level 25 to get to the bonus levels.

@dex
I've been wondering the same thing. Given the location of the achievement, I assumed that it involved dying, but no amount of killing myself seemed to help. I also tried getting all the coins, but that didn't do anything either :(

@dex and 4tran:
I can't figure out "rolling in it!" achievement either. Got all the coins and all other achievements. Anyone?

Developer here, You just picked up a bug! Rolling in it was set to the maximum coins in the game (Which were 50). However after some map redesign, this got reduced to 40, thus making it impossible to get this achievement! We are emailing candystand and will send them the amended version shortly.

Sorry about that guys, and congratulations on picking up the error! :P

Something I discovered is that you can still get 50 coins if you just replay a couple of the levels! Also, this game reminds me very much of "Once in Space" by Hempuli, which has similar gameplay elements, although implemented in a slightly different way.

I am playing the Armor Games version and can't find the "Fallout" achievement. Can anyone help me out?

fallout acheivment is falling off the map 12 times

Actually I only found 39 coins and played level 6 again. I quickly killed my self for the 40th coin and got the achievement. I pwnd this game'z ass by beating all 25 lvls and getting all achievements.

hey how do i get the "its raining men" achievement??? i have beaten' the bonus and 25 worlds but i can't get the raining men and fallout is dieing by spikes 12 times

You spin me right:

Go around the world!
Meaning: Do a full circle around a world. Preferably level 1 and 2.

Complete the game in hero costume.
Meaning: Complete level 25 with hero suit on. ;)

You Spin Me Right
Do a full circle around level 1

My Hero
Complete level 25 with hero suit on

Fallout
Jump off the map 12 times (I suggest level 2)

Rolling in it!
Collect all 40 coins

It's Raining Men!
After you complete level 25 press the black button 100 times