[Note: This game was originally reviewed in December of 2008, but while thinking on the best casual games I've ever played, I immediately thought of this one, and wanted to spotlight it again. Enjoy this Flashback Friday, my fellow foodies.]

The world of professional cooking is ugly, friends. Forget your Martha Stewarts, your Rachel Rays, your semi-homemade with matching-table-decor. It's hard, it's hot, and it is really, really competitive. Top Chef is based on Bravo Channel's reality program of the same name, which takes a batch of fifteen confident up-and-coming chefs and eliminates them through a series of culinary challenges each week until only one remains. The game puts you in the shoes of one such aspiring chef and, with your help, she's going to chop, saute, and julienne her way to the top through fifteen episodes and a whopping forty-five challenges. Along the way she'll have to deal with sneaky behavior, backstabbing, and some furious competition, but trust me; that's the easy part about being a Top Chef in this charming and creative time management sim. 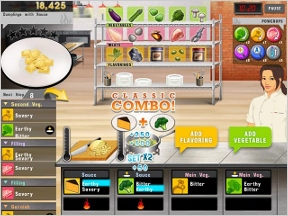 The controls should be immediately familiar to anyone who's ever tried Jojo's Fashion Show. You work under a time limit to create a set of dishes, usually between two and five, that follow a particular theme. The kitchen is composed of four work stations with a bar at the side of the screen that lets you know what tasks you have coming up next. Clicking this bar assigns a task to each available station. After that, you select an ingredient from the pantry that matches the tasks' description and put it on that station. You also get power-ups throughout the game that will let you do things like shuffle your ingredients or instantly select a matching item. While you can get away without using them for the first few episodes, you'll soon be relieved to have several of each under your belt as dishes start piling up in the queue.

Lead by the show's original hosts, Chef Tom Colicchio and Padma Lakshmi, here rendered in ultra cheery Gamelab art, the game is divided up into episodes with three challenges each. At the beginning of a challenge, Padma will give you a brief description of what you're trying to make. Sometimes it's as simple as making a series of canapes that embody savory, rich flavors. Sound easy? Good. Then you won't mind when Padma starts demanding you make, say, dark, earthy and aromatic German dishes, right? Of course not. You're a Top Chef! Oh, and I prefer my dressing red and on the side, please. 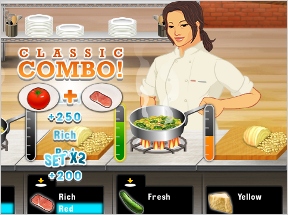 Analysis: People who haven't had more than a passing acquaintance with the kitchen might find this one a little hard to get into at first. While some of the flavor combinations are obvious, a lot of the ingredients featured here aren't exactly everyday kitchen staples, and being forced to decide in seconds whether a particular ingredient would qualify as, say, savory Mexican when you've never even tasted it is often hit and miss. The game offers up little tips before each challenge on what will best suit what you're looking for, but it can still be a lot to take in. Despite being exceedingly kid friendly, it's not exactly easily accessible to younger players in the same way, say, Diner Dash is, so they might end up frustrated. Suddenly, it wasn't enough that I knew kale was green and bitter, oh no, suddenly I had to know which culinary culture it hailed from to use it properly. Don't be like me, kids. Eat your veggies so you're better at computer games like this.

That being said, when things do go well for you, it can almost be exhilarating. As time passes and you become more familiar with the ingredients, you'll find yourself getting excited whenever you spot something like brie or salmon roe in your list. While the game's attempts to string together a coherent sounding dish from your frenzied attempts at matching can be laughable at times (pasta with oysters, shrimp, orange and cucumber sauce, anyone?), it's extremely satisfying to see your finished product garner the stars it deserves. Flavor combinations will come more intuitively to you, and your food will start looking less like Frankenstein's monster and more haute cuisine.

The bottom line is, while this is a time management game, it is also more of a cooking game than most other similar titles. You've got to really think about your flavours here. It's not going to teach you how to make vichyssoise or how to fold a crepe, but it does demand at least a little familiarity with the ingredients, and a lot of that will rub off on you. It's a fun, fast, unique experience that doesn't demand you watch the show to enjoy it. At it's heart, Top Chef almost seems like a game for chefs themselves. Which is silly, because after playing this, everyone will know they're probably too exhausted to use a computer.

Oh boy, another gamelab game! I wonder why I can't find any sign of it on their website. Looks pretty appetizing, I'll surely try it out.

Fun game; however, as you get to the last few levels, it's too luck-dependent on whether the right ingredients turn up to fit your cooking criteria or make the good matches for extra points. That's a little frustrating.

That host has a pretty gnarly scar on her arm, is she based on a real person or something? How odd. I definitely like that fashion show game more than this, not just because tiny weird-looking gourmet food was never my thing.

Hi, Reibear. Yes, Padma, the female host, is a real person. The same host from the show itself. As I understand it, the scar is from a near-fatal car accident she was in years ago.

Actually, I really enjoyed this game. I found that eventually the classic combinations started to make sense (for me lime and tomatoes were the standbys, they went with EVERYTHING) and as you stop trying to figure out whether sausage is appropriate for Italian cuisine because it gets more instinctive, it also gets more relaxing--you can pick classic combinations at your leisure.

I've stopped counting how many times i've had to try level 15-2. Any hints or ideas how to pass this level would be greatly appreciated. I've been at it for almost 2 days now.

I cannot get past 15-2. I can get 4 stars on the first entree making Shrimp and Scallops with Lettuce and Green beans (eeww) but I CANNOT get over two stars on anything else. Is there a specific meal to make on each one, like the shrimp/scallop salad on the first entree?

Yes she really has that scar in real life. She actually wanted in the game to show up.