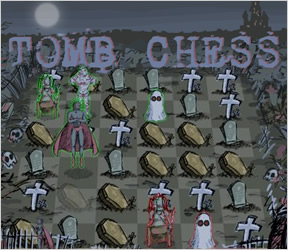 Chess is a classic, easy to learn and hard to master. What would happen if chess was bitten by a zombie and then rose again as an undead shadow of its former self? You'd get Tomb Chess, an intriguing variation on the dynamic, where two ghoulish armies battle across a graveyard.

The graveyard is arranged in a checkered grid, like a chess board, and when the game begins every space is covered by a grave. Players take turns by either moving a unit one space or digging up a new unit. Units have different levels of power, from the Ghostly Pawn with a power level of 1, to the Demon King with a power level of 6. Units can eliminate enemy units that have a level less than or equal to their own, and the kings can be killed by pawns. Victory means eliminating all other units, or entering into a stalemate with a higher point total derived from your active units. The interface involves only clicking: Click on a grave to overturn it, click on a unit to select it, and click on the space where you want to move it.

Analysis: While we commonly associate chess with units being equal in attack power and different in movement patterns, Tomb Chess is actually closer to Chess' Chinese counter-part, with a dash of Stratego and a unique form all it's own. It has depth and replay value beyond most games, and will keep strategy fans hooked. It even has a crude multi-player mode where two people can alternately use the mouse to give orders. The randomized distribution of units gives the game a level of complexity that keeps it fresh, and also adds a level of skill in predicting what is likely to surface, forcing you to hedge your bets against that one green pawn appearing next to your entrapped king.

This is a veritable monster mash of gaming goodness. You owe it to your cerebellum to play Tomb Chess!

Hmmm... too random to be a deep strategy game, but there are some very nice things about it. You actually don't want your king out until later in the game, when he has some room to move around. Both rounds I played had the kings appear and be killed almost right away because they couldn't run from the pawns. The rounds ended up being draws.

Way too random to be a strategy game. It's more like poker: skill may help you in the long run, but any given game is luck. The endgame is the only part that's really strategic, but by that point the game is pretty much decided.

Like both commenters have said so far, this is too random to be a strategy game. Still amusing, though.

Don't like the forced draws/stalemates. I could have caught and killed those pieces still left on the board given enough time to work them to the corner between my high-value pieces, but since after a certain number of moves without kills it calls the round a stalemate, I couldn't. Blast it.

Very silly game... played 4 turns, I made my kind appear, they made some mummie appear, I made HIS??? pawn appear, then his pawn killed my king. Closed it in a strop, crying.

I have to chime in and defend my favorite unfairly maligned flash game. Understanding some strategies should fend off frustration. For example:

You can win pretty much every match (though not every game) against the computer if you follow the right strategy.
Also, if you are interested in a piece-by-piece breakdown of the game for each opponent:

This exhaustively nebbish analysis brought to you by Mike.

I have to second Mike's analysis. I agree the stalemate mechanic needs work, it can be very frustrating, but like the revealing mechanic it's something you can use to your advantage. If you have units out whose attack power adds up to more than the enemy team's, then you can win a stalemate. The decisions involved in revealing new units are slightly less probabalistic than Poker, there are 52 cards distributed amoung 3-4 players in Poker, while this has 40 units distributed amoung 2 players.

It can be faulted for being less easy to get into on the first couple of plays, but it's significantly deeper and more replayable than most stuff you'll find out there. I believe that even if something isn't for everyone, it's worth posting if a good segment of the audience will love it. And I love this game. I've played probably fifty or so games of it. I'll come back to it every once in a while.

I think there is potential for the game but to call it "chess" is like calling a cracker a gourmet meal. There are some vague similarities (in this case, they both are played on a grid, and have an assortment of "character" pieces). But, as already has been pointed out, the gameplay is quite different.

The randomness was another annoying aspect of the game. Was that really necessary... did it add a playability aspect to the game?

On a positive note... I liked the graphics and music.

The concept of the zombie tomb theme might be a good idea to draw young players to learn chess but this game is only going to confuse them if they do. Call it Tomb Wars, Tomb Battles, whatever... but Tomb Chess is just plain wrong.

It's just much more Stratego than Chess, in every possible way. I like Stratego, though. That's not a problem. But the title does seem inappropriate.

The thing that prevented so many stalemates in Stratego was the fact that your opponent's flag was stationary. If you investigated every one of his pieces, eventually you would win. That's not true, here. On my first game, I ended up with a single demon king against an army of lesser pieces, and there was no possible way to defeat them all.

There's a lot of good stuff happening here, but the stalemate situation would need to be totally overhauled before I would want play it again.

Have a look at a Chinese Chess variation called Banqi.
http://en.wikipedia.org/wiki/Banqi

Tomb Chess is the exact same game, with the flipping mechanic, the higher-rank-beats-lower-rank-except-for-the-pawn.

Only difference seems to be the board dimension (tomb chess' 6x6 vs banqi's 8x4), and the number of pieces to fill the board.

wrong. banqi has a critical element LACKING in this game. the cannon.

cannon allows you to shoot another piece down at range as long as there is a piece in between the cannon and the target. this critical piece really makes banqi a real strategy game and tomb chess a wannabe.

I have played banqi since I was 5 years old. It is the children's version of the "full-table" chinese chess which is much more comparable to "western" chess. Banqi is used to teach kids the various pieces in order to prepare them for the "adult" game.

I tried again, determined to not let a computer beat me at a game called chess... I lost. I ran off in a huff, crying. The office laughed at me.

FYI, Banqi has a difference in which the 2nd lowest piece can jump over another piece and is able to eat all the pieces including the king. (the "pao")

This game is just difficult enough to be on the cusp between annoying when you lose and satisfying when you win, which makes for an addictive challenge. Replay value is excellent.

In addition to the addictive gameplay, it also is very atmospheric, the visuals and sound are moody and spooky and that's a real plus.