Together Alone: Love in Limbo

Ben and Isabelle are on the outs, in more ways than one, but that's the least of their problems. Stuck in limbo, battling dark forces that threaten their very existence, each are alone yet must find a way to work together to, um, "survive" their predicament. Via the [arrow] keys or clicking adjacent tiles, help Ben and Isabelle navigate their paths, breaking the tiles behind them until they reach their exits. This tile-removing puzzle game begins rather easily but quickly gains momentum; each of the 75 levels pose their challenges even with special abilities from power orbs and the aid of Ben's dog, Marley. If Together Alone: Love in Limbo sounds familiar, that's because it is... 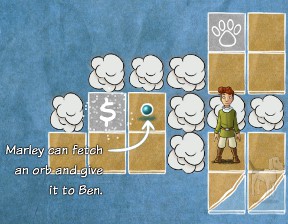 We originally met Ben and Isabelle's alter egos in Qwok Games' first incarnation of Together Alone when it was a much shorter game with a simpler, sweeter story. It may technically be the same game, but more has changed than you may think. Revising the user interface to be more intuitive—including keyboard commands such as [U] to undo a single step or [R] to restart from the beginning of a puzzle—adding diverse puzzle elements, and tripling the number of levels, creators Jan Niestadt and Gijs Rosengarten have evolved Together Alone: Love in Limbo into a richer, more polished, and more substantial game then its predecessor. Additionally, the simple character interactions of the first have been developed into a full-fledged—and immensely snarky—narrative, replete with complications and twists which enhance and mirror the gameplay. It's a bit what you'd imagine a game made by Charles Dickens and Danny DeVito would look like. 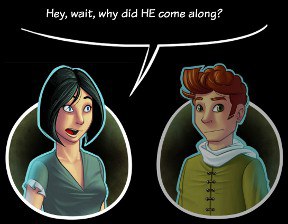 It's hard to find fault with the results without nitpicking, so here's a nitpick: in some ways it's almost too complex. The evolving black comedy of the story panels, which are interspersed between levels, and the wide range of puzzles, many of which require a lot of back-and-forth between characters to solve, make this a hefty undertaking, not a light jaunt of laid-back game playing. While it's easy enough to skip past the story or disable it in the options, you can only skip a few puzzles before you're required to stick it out and solve your way through, taking a bit of the casual out of the gameplay. Then again, that's hardly a complaint, especially if you're craving this style of puzzle. In fact, once you make your way through the first 75 levels, you can continue on with a level editor and player-made puzzles. Together Alone: Love in Limbo is overflowing with hours entertainment, a remarkable treat for fans as well as those new to the genre.

Together Alone: Love in Limbo

Any tips on lvl 23? It has been mostly cake till now.

Beat it. Check out the tips and tricks page.

For tomorrow, this was one of the best puzzle games ever !

Yes, Qwok Games' hint page has a lot of solutions on it, but not all. I don't remember how to solve all the levels but I will go back and look to see if I can help anyone who is stuck somewhere (and I admit skipping some so I could make it to the end of the game in order to review the whole thing). Hopefully we can all help each other out...there are a few levels that I spent way too long on before I realized what I was doing wrong. It's quite a substantial game!

The authors say they're hoping to port it to mobile platforms someday. I think that would be awesome: I'd love to play this on my iPad!

I like how the tiles make a (relatively) 'applause-like' noise when they break. Makes me feel like someone's cheering for me as I play the game.

I'm a little confused by the story. Are we supposed to be rooting for the characters to get back together? They both seem like terrible people.

fun fun fun! luv the story too! thanks :)

I agree. I was rooting for them to become better people, which seems to be the theme of the story. The best way I could describe it: a bit like Charles Dickens in there. Yet with a Danny DeVito snarky twist.

Is the dog's name an allusion to Jacob Marley of Dicken's Christmas Carol? I'm not sure, I wish I asked Jan and Gijs that. Still, that's what I think of with the dog and the entire scenario.

the dog reminds me of Brian from Family Guy :)

Aha, now I see it in the other character names (it took me long enough to figure it out!)...

Even though Jan said it was a loose connection, it was the first story I thought of when I began playing, so very well done use of allusion!

Hey everyone, thanks for the compliments! And yes, the story is very loosely based on A Christmas Carol.

If anyone is stuck, just ask (here or on the QwokGames forum), and I'll add some hints for that level.

Never mind, power of posting (and of hints).

Then you only have to walk them to their goals.

Thanks for providing the hints Questioner, you beat me to it! I've added them to our hints page (with credits), hope that's okay with you!

Really struggling with level 58, and nothing in the hints for it.

Hi! I can't find out what the little orbs are good for, for example in level 21. Or do I perhaps miss something in the keyboard use? I only use the arrow keys. Thanks or your help! B

Hey B!
The orbs give your character a chance to use a power.
For Ben

hold shift and then chose a direction via the arrow keys. He will jump over one empty space.