Alex Starovoyt's puzzle platformer Together is about two squares just trying to find their place in the world, mainly because the rest of the world is filled with bottomless pits, uncommunicative blocks, and deadly spikes. Using both [WASD] and the [arrow] keys (sorry non QWERTY users), your job is to move both squares into the coloured box that matches them in each level. Though initially all this requires is a hop, skip, and a jump,you'll eventually have to figure out how to use them and their surroundings to cross seemingly impossible gaps or towering cliffs. If you stack your square heroes atop one another and hold both [W] and the up [arrow], you'll even be able to launch the top square up high like a spring! 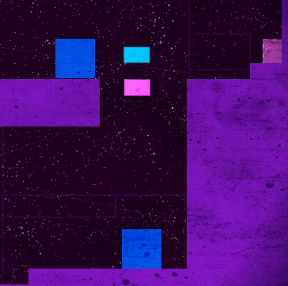 Make no mistake, Together is one seriously elegant little game, with a surreal zen-like feel to its appealingly minimalistic design. It doesn't have a difficulty curve so much as a difficulty snooze on the park bench, but sometimes that gentle combination of mild puzzling and slight reflexes is exactly what you want out of a game like this. But while the game is good looking and plays well enough for the short break it represents, it does feel like it's missing... something to really make it memorable. Minimalist puzzlers have managed to infuse personality and storytelling without saying a word before, such as in To What End, and Together has that potential... it just doesn't quite experiment with it. As it stands, Together is still a solid and stylish little puzzle platformer that's worth a play on your break.

The puzzles were pretty simple and was hoping it'd get more creative. Instead it recycles the levels and throws a rather harsh timer in there. At that point I decided it wasn't worth playing anymore.

I got as far as the level with what I assume is an impossible gap for the pink to jump from left to right (even with the block I assume you are supposed to jump off but almost ALWAYS knock off into the spiked gap) onto what looks like an unreachable upper shelf.

I think it was about level 7.

It would have been nice if the CONTINUE button actually worked (all the time) too.