Breakfast is served! Toast Time from Force of Habit is an absolutely charming arcade game that's all about bread, breakfast, and more bread. Terry is a toaster that shoots toast. Tap the screen to fire a bread blast through the air, taking out any enemies it happens to touch and propelling Terry in the opposite direction. By strategically tossing toast you can move around the screen to position yourself for the next attack. Above all, keep that alarm clock safe until time runs out! 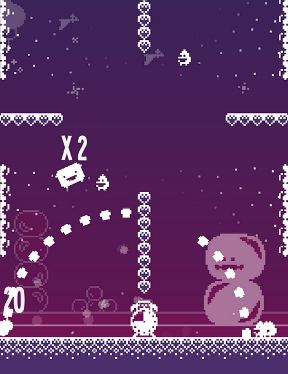 Toast Time feels a bit like Super Crate Box in overall design, though much easier to get into. Each single screen level has a few platforms, some enemy spawners, and that precious alarm clock to protect. Your toast arsenal starts with simple bits of toast and baguettes but moves through over a dozen other unlockables. You switch weapons by collecting crates in-game. The more you gather the more items you unlock, which includes some spiffy outfits you can mix and match and share, a feature that's far more entertaining than it has any right to be.

The wacky sense of fun that pervades Toast Time cannot be ignored. This is a game steeped in happiness with an extra thick layer of joyful-awesome on top. It's a perfect pick up and play game with plenty of things to keep you coming back for more, the least of which is a survival mode and bonus COFFEE TIME mode. Grab it now and start shooting toast. You won't regret it for a moment!