To Be or Not To Be

Ryan North and Tin Man Games' To Be or Not To Be, also available for iOS and Android, is Shakespeare's iconic "Hamlet" taken to glorious, chaotic extremes. Presented in the form of a Choose Your Own Adventure book, you're given the chance to not only play as someone other than Hamlet (why shouldn't Ophelia and Hamlet's dad get in on the action?), but also to take the story in directions the legendary playwright likely never even conceived. To play, all you need to do, once you've chosen who you want to play as, is just click to advance text and make choices whenever they become available to you, with the choices that follow the original tale marked with a very well known skull. Combining the talents of everyone from Kate Beaton and Anthony Clark and more, including an optional narration from Ryan North himself, To Be or Not To Be has piles of different endings, each stranger than the last, and a fantastic sense of humour and style, though some clunky mechanics mean the road isn't entirely a smooth one. 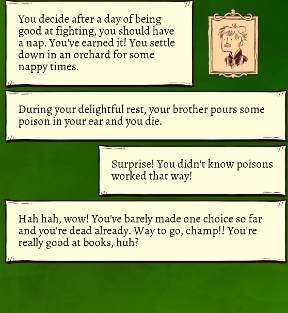 While To Be or Not To Be might be low on interactivity since the choices are relatively spread out, it does comedy like few others. Aided by Ryan North's narration, which is almost always low-key and amusingly matter of fact no matter what he's describing, the story fluctuates through humour that's subtle and dry or flat-out absurd as the situation calls for it. Some of the branching plots are definitely more complete and satisfying than others, and some choices and consequences actually seem to contradict other things you might have seen and done on the exact same playthrough, but by and large To Be or Not To Be delivers a satisfying amount of variety. Think Ophelia should forget all this drama and go on an exciting vacation? The story will let you do it. Want to turn into an underwater pirate ship explorer as Hamlet's non-corporeal pops? The game will let you do that, too. Unfortunately, here in a digital incarnation, To Be or Not To Be doesn't feel like it plays as smoothly as it could. Playing with the narration on can be frustrating since it won't advance along with the text when you click through the boxes unless you "turn a page", and the checkpoint system is dubiously helpful at best with only a few very randomly placed checkpoints accessible for each character. Sometimes even going to the options menu and returning to the game will set your progress back a bit because it won't start up right where you left off. It means the game doesn't have the ease of use it was going for, putting it in the perhaps ironic situation of the original physical book being more convenient. Still, the remarkable amount of talent on display thanks to all the different artists who take a turn throughout the game makes To Be or Not To Be a treat for anyone who loves a story with a sense of humour. It's smart, silly, creative and fun, and while it may make Shakespeare purists pop a monocle in shock, frankly, we wouldn't have it any other way.

To Be or Not To Be (iPad, iPhone, iPod Touch)

To Be or Not To Be (Android)