Titan Attacks! is an enjoyable little retro-shooter with a modern redesign, developed by PuppyGames. Think of the classic Space Invaders mixed with a dash of Galaga and you'd have a pretty good understanding of what Titan Attacks! is all about. The classic "aliens descending from above" scenario is showcased with a stylish, blocky pixel motif featuring a richer move-and-shoot routine than classic predecessors. Titan Attacks! took the golden age concept and loaded it with a variety of new action elements and ship upgrades. 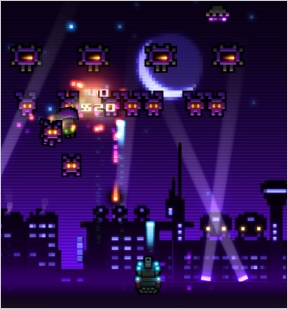 For those of you born after 1990 or so, the Space Invaders game genre features an onslaught of invading aliens, slowly descending down towards your planet. You control a defense ship or turret that moves left and right, firing laser beams to destroy incoming enemies in order to prevent them from getting too close. Titan Attacks! keeps this basic formula true-to-form, but beefs up the gameplay with dynamic enemies, a host of upgradeable ship functions and a few innovative twists here and there.

Move your ship left and right with either the mouse or [arrow] keys and fire with mouse button or [left control]. A combination of the two methods can be used as well for those of you who prefer, say, tactile firing with analog movement. Be warned though, when you begin a new game, your ship feels like it's stuck in molasses. The speed of your ship, along with firepower and ammo count, can be upgraded between levels for cash. Cash is earned independent of scoring for every enemy you kill, as well as other unique actions like special shots or captured enemies. You can also use cash to buy smartbombs (destroying everything on-screen), addons (additional guns) and probably the most important factor in the game: shield repairs.

In Titan Attacks!, game over means game over. There are no saves. You start with one ship and when that ship is destroyed, all level progress is lost and you start from scratch. Luckily it's somewhat easy to keep your shields up as long as you repair them with cash between every level or so. But if enemies are able to penetrate through all of your shields in one level, it's game over. 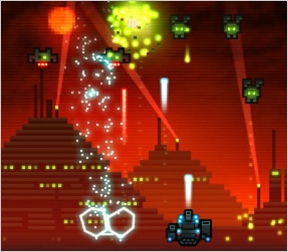 The enemy difficulty in Titan Attacks! is self-adjusting depending on how well you're doing. If you're getting the snot beat out of you early on, you'll be met with less-aggressive enemies in later levels. On the other hand, you won't be earning as much cash that way. There's a pretty hefty number of enemies to face, and they all have different methods of attack. From basic panning drones to mean little rapid-firing buggers, they'll keep you on your toes. Occasionally an enemy pilot will even bail out, and you can "capture" it for extra cash by touching it with your ship, or just shoot it to prevent it from reaching the ground, which will deduct cash from your total.

Analysis: The developers did an impressive job of taking the laughable graphics of old and redesigning them in a way that's not overkill. In many classic-turned-modern games, we'll see game designers go completely off the deep end, trying to re-invent the look and feel of those older games into some bloated, over-produced, 3D monstrosity. But PuppyGames kept it simple, taking the old Space Invaders theme and reinterpreting it into a colorful, shiny, pixel-inspired look. Not mind-blowing by any standard, but it's stylish and meshes well with the similarly-upgraded gameplay.

Even though you might be hard-pressed to see something you haven't already come across in one game or another, Titan Attacks! offers an enjoyable and fast-paced arcade experience. While you will find freshly unique elements in this game, no amount of upgrading can mask the fact that, at its core, it's still a Space Invaders shooter. For fans of the genre and arcade junkies, it's a definite "must check out".

I like this kind of game very much. The game is something like Dino Run or Gamma Bros; old-schooled, pixel graphics and HUGE replay value. Great game

this is a great game, but has been around for a while.
jayisgames should review Droid Assault as well, which is Puppygames' recently released game, and is excellent too

This was released on another website under another name. looks like the creators have made a few tune-ups to it!

Really? What's the older version called? Didn't notice that in my research...

You can "save" your game, if you do this- hit escape during play, it will auto-save. Then click the "x" in the upper left corner to exit the game altogether. When you open it up again, it will give you the option to go back to your saved game. Works for me, anyways.