The darling little arcade flying game for iOS, Tiny Wings, has just gone through a metamorphosis, turning itself into twice the game it used to be and spawning a native iPad version in the process! Tiny Wings 2.0 is sort of a sequel to the original, but creator Andreas Illiger decided to release it as a free update instead of a standalone app, allowing owners of Tiny Wings to grab it for free. And like mama always said, free is better than fooling around with in-app purchases. 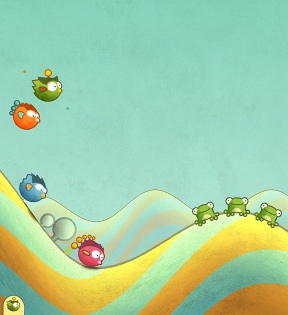 The basics of Tiny Wings are easy to grasp. Our feathered pal wants to fly as far and high as possible, but with such a big tummy and such small wings, all the flapping in the world isn't going to get him very far. That's where the gently rolling hills come into play. Sliding along the landscape, the bird can launch into the air using the conveniently-sculpted ramps. While in the sky, tap and hold the screen to quickly descend, timing your fall to hit a downward sloping section with extra momentum. That speed translates into a higher and longer flight the next time you launch, so the more jumps you nail, the better off you'll be.

Using the same basic gameplay setup, Flight School is the main draw for Tiny Wings 2.0. Instead of flapping solo, you'll compete with three of your siblings to see who can reach your mama at the end of the island. The fastest bird gets the fattest fish! You'll also run across the new rubber flowers, watering holes, and 15 hand-designed levels. On the more technical side of things, Tiny Wings 2.0 now supports Retina Displays and iCloud synchronization. And don't forget the separate iPad-native Tiny Wings HD app, which happens to include single-device multiplayer where you can compete for a high score with a friend!

Tiny Wings 2.0 is a great update to an already great game. The basic setup is similar to games like Wavespark and Dillo Hills, but the oh-so cute visuals will easily win you over. Best of all, if you already own the original game, all you have to do is update it in the app store to experience all the new content!