Defense games are as common as smudged screens on the iOS mobile platform, but developer Simutronics has done something creatively different with Tiny Heroes, a game that has as much personality as it has evil minions at your disposal. Putting you in the role of castle owner, you must place traps and send out baddies to thwart the deluge of heroes who are after your gold. You'd think a few sawblades and a Gork or two would be enough, wouldn't you? 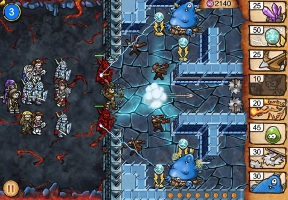 So here it is... your very own dungeon! With the loot safely stored away, you can finally kick back and watch Dr. Who. Except, not. Just outside your castle, groups of heroes are ready to attack, sliding their meaty hands all over your gold. You're not about to let that happen, so it's time to set some traps to keep your loot safe! Tap a unit in your inventory to select it, then tap the screen to place it in your castle. There are dozens of things you can place, ranging from spike traps to spiked smashers, ballistas to magical towers, even mobile baddies that deploy and seek out heroes on their own!

You'll have to deal with a number of different types of heroes, including archers, thieves, warriors, and the like. Each has its own set of abilities you'll have to account for, such as thieves disarming your precious traps. But if you place your offensive units cleverly, you should have every square of your castle covered from just about every type of attack. Placing units costs mana, but you can always plant more crystals to keep your mana pool topped up. 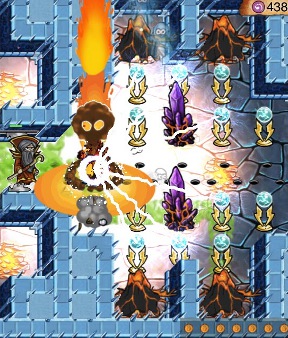 Analysis: Tiny Heroes is the perfect combination of serious defensive strategy and quirky humorous fun. The characters, units and heroes are funny while still being dangerous, and the whole thing comes across like a cartoon television show, complete with a bumbling villain who, in this case, just happens to be the not-always-but-sometimes-bumbling you.

Level design is quite clever and forces you to do some serious thinking in order to pass. This might make Tiny Heroes feel like a difficult game, but if you put your mind to it, you'll see the logic behind the widely varied set-ups and schemes. New units are unveiled at a steady pace, and before long you'll have to decide which ones to carry into battle, as your inventory space is pretty limited.

Simutronics is neither new to the defense genre nor to the field of humorous semi-parodies. Its well-known iOS tower defense game geoDefense has been around the scene for quite some time, winning hearts and players over with its well-tuned gameplay and nice visual presentation. The browser RPG Fantasy University, on the other hand, shows off the studio's talent with fantasy parody, the second element in Tiny Heroes that makes it such a captivating concept to indulge yourself in.

Tiny Heroes is a grand little defense game that has enough content to keep die hard strategy fans appeased but isn't so complex that casual players won't be able to jump right in. There are over 50 levels to play along with challenges, achievements, retina display support, and expansion campaigns available for purchase. Plus, you get to be the bad guy, which is always a nice change of pace!