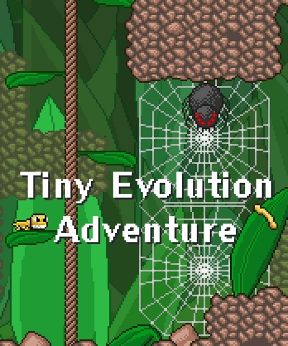 Take up your mortar and pestle and grind together a liberal dose of Fishy with a smattering of E.V.O.: The Search For Eden and you might just wind up with something like Jussi Simpanen's Tiny Evolution Adventure. Made in just 48 hours for the evolution themed Ludum Dare competition, it combines action and avoidance gameplay for a retro-tastic romp up the prehistoric food chain.

Using the [arrow] keys to move and the [spacebar] for chompin', devour creatures that are smaller than you while avoiding bigger ones who'd like to take a bite out of you. Eat the required number and you can evolve to the next stage, but if you get bitten (or if you fall off the screen in certain areas), you'll have to start the current level all over again. Tiny Evolution Adventure is both simple and simply cute, with a great colourful style and all-around cheerful feel. The lack of any sort of checkpoint, even though the levels are admittedly small, can be frustrating if one ill-timed jump or unforseen hit forces you to start all over one or two creatures from the goal, and in a lot of ways its relatively unvaried gameplay is simply crying out for a bit more depth. In some places once platforming becomes a factor, figuring out what's decoration and what will actually keep you from plummeting into an abyss isn't always apparent. But despite a lack of variation, Tiny Evolution Adventure plays smoothly and is aggressively adorable to boot. If only we could all get ahead in life by biting other people on the face. Imagine how much less stressful things would be! Aaaaaa...

This version differs slightly from the Ludum Dare entry, as it contains a variety of bug fixes and improvements. The original version can still be played at Stencyl.

...sorry. Very cute! Not too much trouble with the lack of save points, the levels were really short.

Got the counter down to -5 (yes, that's a negative symbol, as in the counter went below zero) on the first stage and couldn't leave. So I chomped one of those jellyfish that was bigger than me and it went to -6, and I decided to eat all the jellyfish and see if it would let me leave. But I chomped through the second jellyfish three times and then it electrocuted me. Tried the stage twice more and got annoyed.

If the game was longer, I would have had fun flying the dragon. :)

This was fun, and I'd love to see an expanded version.

That was really good! I died at least once on each stage, AFTER I'd already eaten enough to evolve. DX

I was disappointed that you don't get to play as the