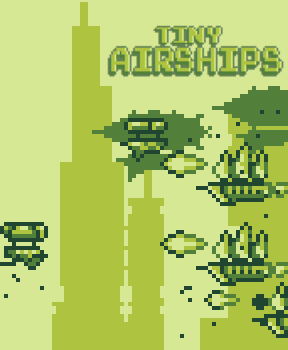 My plan to create literal interpretations of band names was going pretty well. Cream was simple; just needed a churn. Motley Crue proved to be easy as well when I got all my friends together. But everything fell apart when I got to Led Zeppelin. It was a disaster and fell right out of the sky, you see. Tiny Airships, a shooter by Rubicon Paradox is about flying machines that do a much better job of staying airborne. You'll use your airship to defend your home against the vile Tyrian Empire and hopefully you'll manage it without plummeting to the earth.

Pilot your ship with the [arrow] or [WASD] keys, press [Z] or [L] to fire your primary wepaon and press [X] or [K] to fire your secondary weapon. You start with a standard peashooter for your primary weapon and a helpful reflect shield for your secondary weapon, but shooting down Imperial ships earns you money that you can spend on new weapons between levels. Combining weapons is a lot of fun and there's some strategy involved; mixing the charge beam with the drones, for instance, allows you to fire while charging where you'd otherwise be defenseless. If you'd rather just go the brute force route, you could try the massive death ray! Secondary weapons run off of a recharging pool of energy that you'll need to manage. As for defense, you can take three hits with the default ship but you can also upgrade this further with money by purchasing new ships. This might be a good idea, since if you run out of lives you're sent back to the start of the level.

Along with the standard adventure mode which features the between-level upgrade scheme, Tiny Airships also boasts a survival mode. This features collectable pickups that bring the game more in line with standard shooters. Both modes are worth a look; shooter novices will probably have a smoother experience with the adventure mode, however, as the difficulty is ramped up significantly in survival. There's also achievements to hunt; the most powerful ship upgrade is actually locked until you obtain a survival-only achievement, so it might be a good idea to hone your skills a bit!

With retro graphics straight off the Game Boy, Tiny Airships is bound to appeal to old-school shooter fans. The various combinations of upgrades add a nice level of depth as well, since you can customize your craft to suit your play style. It's a flight that's well worth taking... unlike Jefferson Airplane, which was constructed out of $2 bills and unable to actually carry any passengers. Back to the drawing board!

I think my favorite game reviews on this website are the ones that start out having absolutely nothing to do with the game.