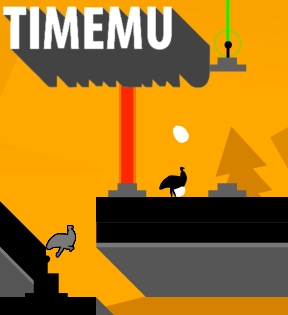 Timemu! It's a game by John Cooney that's one part time-warping, replay-style game, and one part elephant game, without the elephant. And if all of that made sense to you, congratulations! You are now officially a JIG Super Fan! In 2-3 business days, you should receive by post your very own super-official JIG Super Fan kit, including trading cards of your favorite JIG reviewers, an official JIGSF decoder ring, and other cool, hip swag to add flair to your happening JIG lifestyle.

But enough of my empty promises: In Timemu, you control Timemu, an emu with control of time. Timemu (or "Tim" for short) is just trying to find a home, but must use his powers of temporal self-duplication and navigate several platforming levels to do so. Move through space with the familiar [WASD]. Move through time with the [spacebar], which lets you warp to the start of a level, creating a new temporal copy of Timeme to work with various past-emus. You can also use [<] and [>] to rewind and fastforward time, though I found this isn't strictly necessary. The idea is to create a series of gray-shaded, past incarnations of Timemu to aid one black-shaded, present incarnation in getting to the end of the level. Usually this involves one or more past-emus triggering a bypass switch for various colorful force barriers, or stacking emus in a human pyramid (of emus) so that the topmost emu can clear an otherwise insurmountable wall. There are also obstacles to dodge, such as unaccountable, mechanical stompy-blocks, and the wily echidna, foe to emus and timemus everywhere.

It's similar to many other games we've reviewed, though it does distinguish itself with a bold, limited-palette design and a groovy soundtrack. One unique feature is the possibility of what the game calls "ornithological paradoxes." Rather than create a frame-by-frame replay of past runs through a level, each incarnation can potentially interfere with the position of others, so a barrier that you successfully unlocked, for example, becomes deadly again, if something interferes with past-emu's previously successful jump. It's a bit of extra challenge, one that I find a little frustrating in its unpredictability.

Still, I dig the style, and I like the execution, even if the gameplay is not wholly original. At 25 levels, it's a breezy, quirky outing that's worth a look. And if you play it, it's another punch in your JIG Super Fan club card. 25 punches and you get a free JIG iron-on transfer, so you can wear JIG all day! (Must present JIG Super Fan card to redeem prize).

to jump as high as you like, jump and then just as you start to fall, rewind time just a bit and try to jump again. it takes a while to get the hang of it, and it doesn't work really consistently, but if you get it just right, it lets you jump again mid air, which you can do repeatedly until you're as high as you like.

the controls are kina glitchy. sometimes i'll just keep going even though i let up on the key.

if i was somebody i would be awaiting my JIG super fan kit. but unfortunatly im a nobody. oh well...

On topic: good game, but very difficult. it takes a while for me to get it. Hint for most levels: easier said than done.

It seems less polished than "Chronotron", at least on level design.

Although I have yet to play Timemu, I had to comment and express my awe for that fantastic opening paragraph.

So far I find it a bit mundane and repetitive. Plus are we talkin about alternate realities here. Cause I find the chickens pulling stunts that I didn't do.

I agree with Dweeb's comment. The game is fun and cute, but only on a very basic level. The design of each level is exceptionally bland, and the mechanics are really basic - run to switch to turn off wall, reboot, run through opening. The only "challenge" in the first ten levels comes from sitting perfectly still long enough for all your future clones to settle. The level with the three buckets that needed three emu in each was simple and time consuming, and not really fun. In fact, I feel like the buckets are just an uninteresting mechanic altogether.

The postcards between levels are nice, but not nearly enough to balance out how mundane the rest of the game may be.

This would be greatly improved if there was more detail and variety to the level design. Add in some decorations to make each level feel like a unique zone. The other way would be to eliminate the repetition in the levels - there's no reason to have three buckets in a row when one bucket presents the same problem in a shorter and sweeter way.

JMTB usually makes good stuff, but I think this one was a total miss.

Collision detection on the echidnas is awful, plus its really annoying that you can get far in a level and then one of your carefully set pastemus lands on the back of your presentemu and gets moved out of position, and you have to start all over again from the beginning; eventually I just got fed up and quit.

You don't need to start over, just use to time scrub to before you flubbed up.

That's , and . which are the left and right brackets.

My brain. It hurts.

The emus do not exactly follow the actions you made when you recorded them, particularly if you are riding a clone or the clone is flapping. I had to restart several times because of this. If you're playing for par and you can't just write off a messed up emu, it's even worse.

An easy way to get over some of the barriers.

Jump once, and then hit jump again immediately. It's a good enough trick to bypass the barrier level in the first world and get under par. I only had to disable the middle barrier.

No reward for a "perfect 100% everything"? How disappointing.

Here's all the spoilers:

Collect the eggs, then hit rewind to start again. Keep hopping until you fly, then fly over all the obstacles to the exits. OR - take a splice, stack yourself on the splice, fly and hold the up button, then you will bounce off the spice and fly super-long.

OMG i made waaay to many Timemu's...