The only thing cooler than being a helmet-wearing space surfer is having the ability to travel through time while surfing through outer space. With a science fiction slant and some stylish artwork, Time Surfer from Kumobius is a bit like combining Tiny Wings and Braid, adding in smashable objects, creative challenge missions, deadly obstacles, and a handful of helpful/decorative items to equip and party down with! 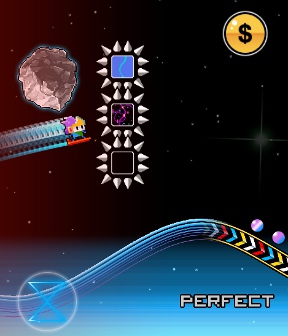 So, you're surfing along, right? Tapping the on-screen arrow to catch some speed each time you descend, hoping to land on a downward slope so you can keep the air acrobatics going strong. Then all of a sudden you make a mistake, something like falling into a pit, bumping an enemy, or losing so much speed that the exploding star's wave singes your hair. Since those are generally considered "bad" things, you'll want to tap the little hourglass icon to turn back time a few seconds, giving you another chance to succeed. This rewinding ability is limited, though, and must be refilled by collecting orbs along the ground, so you're still going to have to learn how to surf if you want to get anywhere!

Time Surfer draws upon some very well-established gameplay elements to create a familiar space to play around in. The one-touch surfing mechanics will immediately click for most players, and rewinding time is as natural to a gamer as eating mushrooms to grow taller. Earning and equipping helper items is a bit of a departure for the genre, but you'll quickly realize that it's awesome to surf amongst the stars with a rubber ducky in tow. Time Surfer is a little bit of the old and a little bit of the new, but it's always exciting to fly around in space!