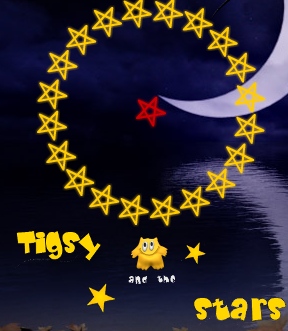 Tigsy and the Stars is a short, simple one-click game revolving around the titular character's infatuation with... well, with the titular stars. The idea is that Tigsy is lonely, and wants to collect all the stars he can. How? Well, it turns out NASA has been going about things entirely the wrong way, because all Tigsy needs is for you to click to make him jump, and use your mouse to guide him through the air. Jump through or land on a star to collect it; you need to collect all the stars before you touch the ground or they'll reset.

Even the addition of a few different coloured stars you need to avoid or grab in a certain order doesn't make this game particularly challenging. While it could do with a bit more variety, the soft visuals, sleepy music, and simple gameplay ultimately puts me in mind of an Orisinal game. It's accessible to pretty much anyone, and is about perfect if you're looking for something easy and relaxing. This time, collecting achievements also does more than massage your ego; for each one you earn, you get a small boost to Tigsy's abilities. It's a little touch, but a clever idea; earn your advancement through good ol' fashioned skill rather than just, say, leveling up or getting a high score. Of course, if you don't have any of that good ol' fashioned skill, you're out of luck.

Fortunately, even the less, ahem, "skillz" inclined of us will be able to finish Tigsy. Even with thirty levels, the game is pretty short. (To give you an idea of how short, one of the achievements is actually granted for finishing the game in under eight minutes.) While some may find the gameplay too simple or slow, Tigsy and the Stars is a day-dreamy little arcade exercise to cap off your day, or to limber up when you're supposed to be working, BOB.

... I... I don't actually know any Bobs who would be at work right now. I was just hoping to freak someone out.

Play Tigsy and the Stars

Is there a non-Facebook url?

[It shouldn't require a login to play. I was assured of that by the sponsor. -Jay]

Wow. What an annoying game. In order to move you have to be on the same line as Tigsy, just above the ground, making movement near impossible to master. And there is no stage selection screen. So if I happen to click save diploma, realize I don't want to add Funflow and go back, all of my progress (which wasn't much, but still) is gone. Not really worth the hassle.

I agree, king...the movement is touchy at best and I can't get him to move after he jumps off a star. It might have to do with me using Chrome, but it seems like more of a game mechanic. Oh well, seems like a fun game!

Game is terribad. I got too annoyed with the controls in the tutorial level to even bother playing it.

I had the same problem as kingjulien86 and juxta and use firefox.

Playing from the link O posted made it disappear, though, and I could move Tigsy just fine.

Yeah, it's nigh-unplayable on the Facebook page, but O's link works much better.

Apparently there is some invisible html div blocking the game if you aren't logged in.

O. M. G. A facebook app? Really? WTF? It's cumbersome, sort of dumb, and it's another secret facebook annoy-the-hell-out-of-everyone, bug-all-your-friends-with-useless-crap wallbomb. Gees. Can I give negative stars?

Ahhh yes so much more enjoyable on the non-Facebook link. For some reason on Facebook I had to keep my mouse at the bottom or it wouldn't register, making the game unplayable.

Otherwise it's pretty fun - very similar to Winterbells in particular from Orisinal and actually had more depth to its gameplay.

Yeah, I think the original link should be replaced with something that's not the Facebook one. I gave it a very poor score before I came to the comments because the Facebook version was all but unplayable.

The game itself is cute and easy going. Pretty okay. Had steering problems myself twice, on third reload it worked pretty well.

The facebook thing, this isn't about this game, nor is this game necessarily a facebook ap. This is a new venture from facebook to rule the internet and throw google from its trone. Every site can now easily integrate itself on facebook. Or have facebook surround it, with adding very few code. And your users than can point your friends to sites etc.

I've no idea if this going to work out, and how the google vs. facebooks wars are going. My first gut feeling when seeing this game (the first page I've seen taking use of facebooks new feature) surrounded by facebook is: No thx, tough.

Oh forgot, not saving the achievements does not make you to want to come back, so play it in one way through.

Jay, although it doesn't require you to be logged in to Facebook to play, it's practically unplayable when not signed in. As Tiko says, there's an invisible div tag that covers the top half of the play area, which artificially limits you to the bottom third to half of the screen. On later levels (like the spinning circle with alternating yellow and green stars), not being able to control the character with the mouse in the top half makes the stage rage-quit-worthy.

You can experience this yourself by signing out of Facebook, then following the link.

(For what it's worth, I don't blame you, King, or the developers for this behavior; it's caused by Facebook quirks.)

Used the non-Facebook link, and clicked the "Walkthrough" to see how to get through level 28, which opened Facebook in the same window as the game. When I hit "back", all my progress was lost. Lame.

I feel bad, that such a game could make me scream obscenities at an almost cute little guy so close to the end (gave up on level 26).

I logged out before playing this because I don't want my wall covered in little achievement posts. Please try to avoid facebook links in the future; I like to keep as much control over my facebook as I can (despite the website itself not wanting that).

The text in this game was very painful; I kept waiting for the punchline but it never came.
Either this was beautifully subtle satire that managed to precisely walk the line of credibility, or it really was absurdly saccharine to the point where its sincerity was almost-but-not-quite unbelievable.

Game was decent though. Controls didn't give me any trouble, and the difficulty curve was just about right for such a short thing.

I agree with StephenM3, no punchline. I'm still wondering if it was meant to be satiric.

Around level 28 I wanted to watch the walkthrough, which obliterated my progress so far. I don't think I'll play again.

Has anyone managed to find out how to get the "Secret" achievement? I've tried basically everything I could think of, but no success...