We've all played the hidden object game where you have to piece together clues to some long-lost relative's hidden past. Most of the time it's fairly dull, but in the case of Tiger Eye - Part I: Curse of the Riddle Box, it's quite the opposite. The story in this hidden object game was written by author Marjorie M. Liu, and even if you're not a fan of her work, you'll appreciate the characters who have a little more depth than usual. Wrap that around a sturdy core of puzzle solving and mini-games and you've got an excellent hidden object game on your hands. 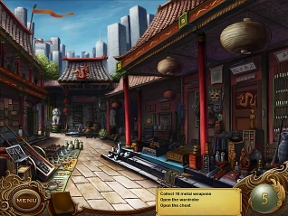 Let's share this little factoid right at the beginning: Tiger Eye - Part I: Curse of the Riddle Box is based on Marjorie's novel of the same name. It's a paranormal romance book, and the game adaptation follows the same style of storytelling. Expect a plucky female lead character with a psychic ability, a lot of soft fuzzy colors, and a beefy warrior guy who seems to have forgotten how to wear a shirt. Look beyond that exterior, though, and you'll find a game with solid puzzles, loads of unique mini-games, and overall great design.

Here's how the riddle box riddles: Dela starts off in the Beijing Dirt Market following a strange dream. Your mission objectives are listed on the bottom of the screen and are usually pretty straightforward (find ten metal weapons, open the wardrobe, fix the bike, etc.). To get things done, use those well-trained item finding eyes of yours to spot everything, then click to pick it up. Some items merely need to be found, while others must be used with other objects. There's no inventory to fuss with, so a little clicking will get you a long way.

Many spots feature sparkles or question marks, each denoting more information is to be found. The sparkling things are best, as they initiate a mini-game! Tiger Eye often feels more like a collection of mini-games than a hidden object game, as they fly at you at a fast pace and are really well done. The usual variety of puzzles can be expected from these diversions, ranging from word games to tangrams, logic puzzles, jigsaws and more. Each of which comes with a few hints and the option to skip the game entirely. 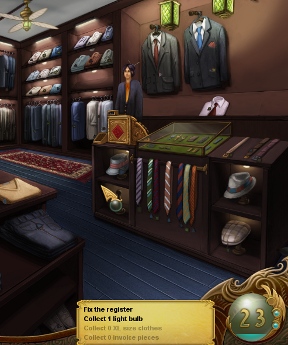 Analysis: Romance stories aren't for every casual gamer, and part of me wonders if Tiger Eye would be better received if the storytelling were a bit less... well, romantic. Even if you can't stand the plot content, the cutscenes are skippable, so you can go right to the next part of the game. You'll miss some decent character development in the process, but, you know, do what you've gotta do!

Aside from completing the game and getting involved with the story, Tiger Eye presents very little else to keep you occupied. The game itself is long enough, but there aren't too many reasons to go back and keep playing. Item locations are always the same, so completing levels a second time around wouldn't offer any challenge. The mini-games can be unlocked to play from the main menu, and honestly, they're one of the better parts of the game, so that adds a little replay value to the package.

If romance stories of any type are your thing, you're pretty much required to give Tiger Eye a try. And even if they're not, the game delivers a sturdy hidden object experience with loads of mini-games and some great puzzles to complete.

Tiger Eye Part I - Curse of the Riddle Box Walkthrough

Bonus Round
The Patrician Clothing Store

screen shot to arrive at your final destination.

Congratulations, you have completed part 1 of tiger eye...to be continued and we are told part 2 is coming soon! Watch the credits so you can see the preview of Part 2 which follows.

Special thanks to Jazz for this fantastic Walkthrough!

I must say that this is one of the better games I have played. The story, graphics and voice acting are done quite well.

That being said though, I've finished the game and am looking forward to the sequel. But even after finishing it, the Extras are still locked. I haven't skipped a single puzzle, only used hints for some of them, so I don't see why it shouldn't be unlocked by now.

I enjoyed the game, and enjoyed the plot although I did find the romance aspect to be far to cheesy for my taste. I really liked the way all of the Hidden Objects were things that somehow tied into the story, and the fact that even if you did return to a scene you didn't have to keep "finding" the same objects.
However I had a similar problem to the one ThemePark described...I achieved the highest level (over 50) and did unlock a couple of extras, but I can't figure out how to play the mini-games from the menu screen as you describe in the review, JohnB. Help?

Well, as it turns out, I never knew you had to gain 50 Psi points to unlock the Extras since I never once had 10 or more and thus didn't get the message about them during my first playthrough.

I played through it again, unlocking the Extras, and I think JohnB was referring to the dress Hari minigame, which is the only minigame that's actually present. The rest is just concept art, and some pages in the book in-game.

Tiger Eye Part I - Curse of the Riddle Box Walkthrough

Bonus Round
The Patrician Clothing Store

screen shot to arrive at your final destination.

Congratulations, you have completed part 1 of tiger eye...to be continued and we are told part 2 is coming soon! Watch the credits so you can see the preview of Part 2 which follows.

Special thanks to Jazz for this fantastic Walkthrough!

I liked the game set-up, though the romance lines were incredibly cheesy. My favorite line is "Both the tiger and the man in me wanted her."