You've probably played Tic Tac Toe before, or Noughts and Crosses, or whatever you want to call it. And as soon as you've mastered the strategies of the game, every round ends in a draw, and it becomes dull. But with a little twist added in, Tic-Tac-Toe-Ception makes you rethink everything you know about the pencil-and-paper game. This Khan Academy build demonstrates one variation of this puzzle-infused variant of a strategy classic. 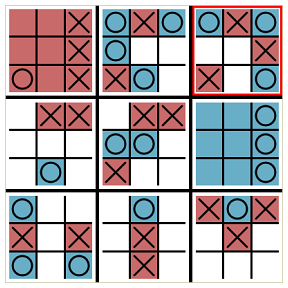 This Tic Tac Toe variant is played with nine small grids embedded in one large grid. You always play as O, and your computer opponent plays as X. Being the first to get three in a row in one small grid wins you that square in the larger grid, and three big squares in a row wins you the match. However, you don't just get to play your turn anywhere; you're only allowed to play in the grid that corresponds to the square of your opponent's last move. Your opponent's move is then limited to the grid that corresponds to the square that you play in, an so forth. If you're sent to a grid that's already been won to take your turn, you have the freedom to play anywhere, but remember that your move will still set up your opponent's next turn. A fairly obvious move in a standard game of Tic Tac Toe can suddenly become a dubious decision when you know you have to take all ten grids into consideration at once.

It's not random, Ashiel. The square chosen is chosen by the square you choose in the smaller squares...

This is a completely awesome concept! Bravo!

Well, I *loved* this when I played it earlier today, but now it seems broken. Rather than waiting for me to click on a square, it is automatically putting an "O" in the first available square that I mouse-over... effectively stopping me from being able to choose the center square most of the time. No fun that way - I hope this bug gets fixed.

yeah i made a twit of myself realized that after posting. :D

Some friends of mine taught me this game on a school trip in eighth grade. It's been one of my favorites ever since, and I'm glad to see it turned into an online version.

No fun at all. Granted, I've figured out the rules, but it's still no fun. Why? Because I can't go first, and therefore have no chance of winning. Even in an advanced form like this, Tic-Tac-Toe is still Tic-Tac-Toe, and the computer is clearly not programmed to be an idiot.

Beat it, but for this type of game, I'm afraid it's 'one and done'. Challenging though!