[Note: This game deals with physical abuse and other subject matter players may find upsetting.]

While many visual novels tend to focus on romance, Yucie's free indie game Those Without Names focuses on the close relationship two siblings can share. Eight awakens, confused and disoriented, inside the Building, which sits on a hill beneath the glow of Earth high above. She doesn't remember her name, just a series of numbers that are used to identify her and the few other residents, and while she also doesn't remember much about her life, she's relieved to see her brother, Zero, here as well. In this place, your memories come back to you in bits and pieces, and if you find enough, you'll also remember your name and awake. Eight is convinced it's some sort of bizarre lucid dream, but Zero isn't so sure, and as Eight's surfacing memories turn from sweet and simple to something more troubling and hard to watch, finding the truth might be more painful than she's willing to admit. With four different endings depending on your choices, Those Without Names is a short and bittersweet story about family, and how simultaneously simple and complicated it can be at the same time. To play, just click the dialogue choice you want when it appears, and right-click to open the save and load menus whenever you like. 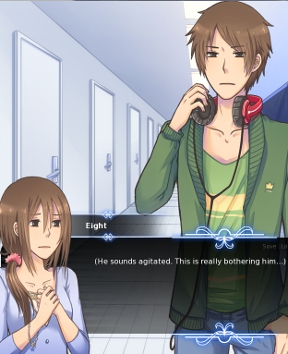 Despite being so heavy on foreshadowing and subtext that you'll probably guess what's going on with Eight and Zero long before the story reveals it, Those Without Names is a satisfying narrative about being there for someone when you desperately need someone to be there for you. The brother/sister relationship isn't really something that's gone into in depth often in games, especially visual novels, and in Eight and Zero Those Without Names has two characters who feel complex and sympathetic, as well as believably caring about one another. The problem, ironically, is that most of the endings suffer from a lack of closure... for a story so heavily about the relationship between Eight and Zero, even the "best" ending feels like it's rushed and needed one final conversation between them to really solidify the deeper themes behind it. Those Without Names was created for this year's NaNoRenO under a very short development period, so this is understandable, but it still feels like it could have sacrificed one or two of those extra endings, especially since a lot of the choices feel vague or superfluous, if it meant fleshing out the others in a more satisfactory way. Despite this, Those Without Names is still a compelling and captivating experience, from its beautiful artwork, otherworldly atmosphere and soundtrack, and its story may not always be happy, but it's thoughtful and genuine all the same. Eight and Zero may feel like they had more story to tell, or more closure to get, but they're still a great pair of characters with a deep love for one another that feels real without treading too far into melodramatic you guys their feels are SO REALS territory. If you want a story with heart that shows you can be bruised but not broken, Those Without Names is a great choice for a relaxing, mellow read.

This game made me cry v_v it was so sad! Especially how

were abused by their dad. I don't like my dad, but at least he's never done that.