Ask any six-year-old, or twenty-six-year-old who's been putting adulthood off for a couple of decades, and they'll give it to you straight: There's nothing in this world more awesome than a cardboard box. So obviously, a puzzle game based on the delightful properties of cubical cardstock must be really awesome, right? Worry not, for Hadyn Lander tests this theory with the whimsical This Way Up! Don't just play with a cardboard box, become one. Only instead of the limitless potential of the imagination, this box is filled with a limitless supply of magical purple pellets which it can fire at will with the [spacebar]... but only out of its top side. Since your boxy body can only move by turning over one side at a time, making sure your top end is actually facing what you want to shoot at isn't so easy! Using the [arrow] keys, tumble your way through a fanciful neighborhood in the sky... avoid malfunctioning fire hydrants, be careful around those icy patches, and carefully get into position to fire violet balls, ping lots of glowing tetrahedral switches, and open the way forward. The bubbly, content music, musical sound effects, and summery aesthetic give This Way Up a relaxing feel, but though chill, this puzzler still has a few teeth! 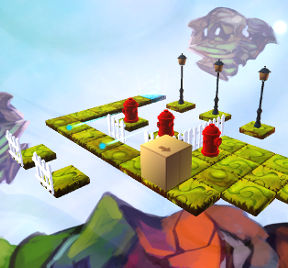 At its core, This Way Up draws from some very traditional and well-worn puzzle elements. You must move a cube across a grid, one face at a time, and the direction of each face is important. But it doesn't feel like just another "old-fashioned" puzzle... the emphasis the game places on manipulating the environment, as well as your box, gives it a fresh angle. This Way Up also makes skillful use of gimmicks and hazards. While they largely follow the standard block-puzzle templates, such as ice that forces you to slide in one direction, or platforms that crumble after they've been stepped on, the game introduces new tricks every few levels right up until the end, and requires you to interact with them in different ways. That water-spitting fire hydrant that was such a nuisance to you in the last level might be necessary to cross a chasm in this one, for example! It helps that the game's aesthetics really are dreamlike and gorgeous. The graphics and backgrounds bring to mind a bright summer morning as bent through a children's cartoon, and the pizzicato-string sound effects are charming enough to make even the grumpiest of Gusses smile. However, there is one aspect to the game that is significantly less charming. It uses an isometric viewpoint, and the camera can't be changed. If you're not familiar with isometric games, this can make the controls rather challenging to learn. Cardinal directions like "up" and "left" might not be mapped to where you want them to be, and this can lead to lots of flailing around and falling off the edge of the map. Since your main character is a constantly-rotating cube, you don't have a clear "front" and "back" to help orient yourself, either. But if you know your isometrics or you take the time to familiarize yourself with the controls, you'll find that This Way Up is a sweet little puzzle game that takes old block-puzzle standards and makes them feel new again. Now that's thinking... outside the box.

Play This Way Up

The link in this article is broken.

There was an error with saving the game's page. It's been fixed, thanks! - Ed.

Clever and just challenging enough to be fun but not frustrating. Only downside is that I didn't find a way to switch the controls. Playing 90 degrees off adds some extra challenge...

Note that you can use the mouse to control the box, by dragging it in the direction you want. This might be helpful for people who find the keyboard confusing.

I like this one.
Reminds me of the old gaming days back on C64/early PC

But I am stuk at Level 22.
I dont know how to pass the second bridge.
The first one gets de/activated by the firing hydrant but the second turrent cant be activated - neither by me or a hydrant.

Thanks, Dylan Dang! The angles were driving me crazy.

This one's giving me a plug-in error, but I don't think I'm missing anything.

Awesome puzzles and a nice atmosphere!

Here's how I got through that one:

Use the first hydrant to "moonwalk" and get reoriented on the platform.

Let the hydrant hit you and knock you off the platform, but before you fall, roll back onto the platform. Move out of the way quickly before getting hit again and you should now be oriented to hit the second turret.