It's difficult to pull off a noir atmosphere without getting pretentious. It's difficult to pull off a stealth game without resorting to tired tropes. Third Eye Crime manages to avoid both of those traps. The astonishingly stylish top-down puzzle/action game puts you in the speedy shoes of a criminal who can read minds. He uses his ability to tell where guards are about to search, staying quite literally one step ahead of trouble. 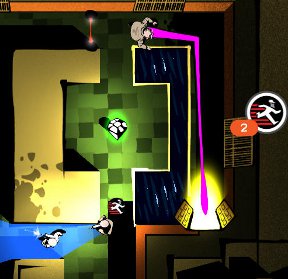 Draw your walking paths through each maze-like level, then adjust as necessary when guards sense you're nearby. Third Eye Crime isn't just about avoidance, though. It's about prediction, manipulation, and sometimes speed (can't always be a master thief, right?). Because you can see what will happen, you get to engage in some tactical misdirection to throw your pals off the trail. Trick them into moving down a corridor you're not taking, then grab the loot and hightail it to the exit. After all, it's not like they can read your mind.

Third Eye Crime does something a little different for the stealth genre, and it does it with some fantastic artwork and a wonderful jazzy soundtrack. Easy to play, difficult to master, and perfect for casual players to pick up and enjoy.

Is there any word of a future Android release? I'm afraid my aging iPod Touch 4S won't be able to stomach something like this.

Unfortunately no, no word about an Android release yet.