In water, heat rises and cold sinks. That's the premise behind Thermo, the temperate and mercurial new platformer by Andrew Wolfers, Daniel Carpenter, Grace Ren, Joel Gross, Kelvin Jin, and Robyn Nason. (Did I leave anybody out?) In each of the 30 levels you need to first open the exit portal and then get to it... somehow! The activator and portals aren't necessarily where you can get to them, and that's where water comes in. Floating masses of water are strategically-placed throughout the levels allowing you to use your special abilities, if you have them. Passing between red contacts heats you up, enabling you to rise if you start out in water. You'll continue to rise until you hit an overhead surface at which point you'll fall just as you ordinarily would, though you can steer your descent. Blue contacts let you create an ice platform under you while in water. Yellow contacts enhance either ability... you can create up to three ice platforms in water if you're cold, and walk on the ceiling if you're hot! Dull grey contacts return your temperature to normal, but leave any platforms or ceiling-walking abilities if they're active. 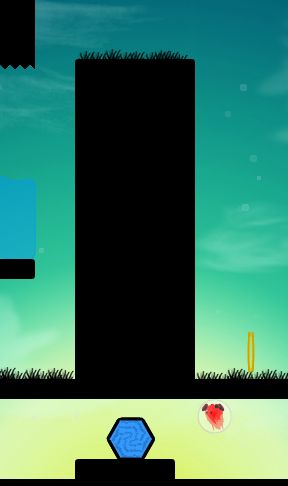 [WASD] and the [arrow keys] will get you around, and the [spacebar] toggles your current abilities, if any. Despite the controls being a little nonresponsive (hitting the [spacebar] a few times and still managing to fall off The Bottom of the Screen, for example) the keen level design keeps you coming back for more. Thermo's cozy, atmospheric soundtrack and tranquil environments enfold you snugly in it like a warm blanket, and the background music muffling whenever you enter water enhances the immersive effect dramatically. All this reduces the tendency to want to ragequit during the games more unforgiving moments, such as when it occasionally refuses to let you jump or when unlike the majority of platformers merely sliding against the side of a platform that has spikes on it will restart the level. Despite its drawbacks and for all its comforts, Thermo will hand you levels that look completely insurmountable at first only to prove easy to master once you've tried a few different approaches. Sometimes leaving special ability effects in place while swapping to another is what you need, such as leaving ice platforms in place while you're cold to walk underneath while you're hot. Or alternatively, keeping your ceilingwalking ability from being hot active while you swap over to cold in order to build your ice platforms from the other direction. Thermo has taken a straightforward game mechanic and wrung it out for all the audacious level design creativity it's worth. Go ahead. Dive in.

I guess somebody mislooked the last level S5 as 55. (I did too, actually)

I'm completely stumped on level 13 (and level S1) which both seem to require some kind of trick with the fire power that I haven't figured out.

It becomes critical to realize that

the fire power starts about a quarter second after you hit space, so if you're running as you activate, you'll start floating up a character-width to the side of where you were when you hit the button.

14 has me flummoxed at the moment.

Yeah, that would do it. I can see now that I know what to do that level 13 is intended to teach you that technique, but unfortunately I wasn't able to glean it from the level design. Thanks, now I've beaten the regular levels, but S1 is still proving difficult due to the control issues mentioned in the review. They really could've stood to be more generous on the timing of your power activation in the water.

Helpful hint on at least one level that I've seen so far: The top of the level counts as a ceiling.

Does anyone know how to get past the bubbles on the upper level on level 16. It looks like I have to be warm, but the bubbles are preventing me from getting to the end.

That level is meant to teach you a new mechanic:

changing your temperature doesn't cancel ongoing effects of the previous one. In case you still need a nudge:

once it's time to go up to the exit, be hot and float right through the cold pickup, then use the icy platforms to reach the exit.

Well, Thermo, you may have outsmarted me, but you know what you can't do? LOVE. That's right. Because you are only a few lines of cleverly-written computer code.
YOU MAY HAVE DEFEATED ME FOR NOW, THERMO, BUT YOU WILL NEVER DEFEAT THE HUMAN RACE.
(In other words, this is a great game that I can't seem to stop playing no matter how many times I impale myself on the same spikes.)