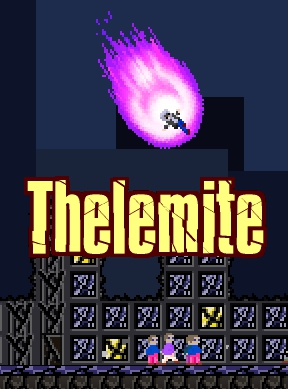 Even with the promise of super-abilities, volunteering to undergo tests performed by mysterious organizations is the kind of thing that seems like it could go either way. Even if this FreeMedExperiments.eu turns out to be on the up and up, who knows what they will expect if the experiment is successful. That said, it's already too late for the mild-mannered and slightly-jerkish Melex Archer: he's signed his name on the dotted line and, with the influence of radioactive Thelemite, he's been given a ton of power and no particular sense of responsibility. Sure, he'll spring into action and brawl his way through waves of mutants, but it's sure as heck not because mission control is telling him to. No sir. In this fun little retro fighting game from Mikolaj Kaminski (Sos), the hero is as much a danger to the populace as the mutants.

Use the [WASD] or [arrow] keys to run around the landscape and climb up buildings. Attack with [X], jump with [Z], and, once charged up, launch a special attack with [C]. Smash mutants with combo attacks and grab power-ups to become more epic. Collect Thelemite from defeated enemies to purchase upgrades in the store. Mission control will give you directions to your next objective, as well as plenty of snark. Defeat all four bosses to save the city... well, save the city from everyone except you.

Inspired by (and almost a de-make of) Prototype, Thelemite is a neat mix of dark comedy and hyperactive attack-spamming. This is a game that will rise and fall on your skill at button-mashing. While the action is fluid and engaging, it is often quite difficult to tell what exactly is going on. Everything just moves so fast and explodes so quickly. Also, while the writing is clever, its abrasive tone wears thin as time goes on. There's only so many ways to insult a player-character after all. Still, Thelemite is worth playing, if only to try out the awesome combat. Besides, has smashing through an entire city ever not been fun?

This game certainly doesn't do anything to penalize failure. Actually, it does the opposite: if you die, you get a bunch of extra crystals on your next incarnation. So if you're having trouble because your skills aren't upgraded enough, stick with it and you'll eventually get more.

The choice to use all the goofy little vocalizations that Bruce Lee used in his films was weird, but it doesn't *quite* get dull. I wonder if there's an option to put the character in a little yellow jumpsuit with a black stripe?

Stuck in the "Now burn!" part. I can't even touch the other guy, any tips?

Jakob, upgrade fully.
Stand and charge. When he is just overhead, hit "C" and IMMEDIATELY go back to charging. He will pause and start shooting again. Repeat. Repeat. Repeat.

Jakob and SkylerF: I've also noticed that when you're attacking, you can fly through the flames, turning them into thelemite crystals. I haven't yet been able to translate that into a win but it's an idea.

I've read Newgrounds' forums and apparently that's what other people do but if that's the expected way to finish the game then it's not worth trying. I'm fully upgraded and only with great luck I can get a couple of hits like this, and once I got all three hits, but that's it. The enemy firerate is just too high and if you get hit at a bad angle (e.g. right above you) you can't focus quickly enough to survive.

Decent time waster, but it feels more like a webtoy than a game.

Ok, so here's a weird thing. I've played some Time trial, then I came back to Story mode and now I one-shot the last boss.

The final boss is easy, if you know how to kill him You'll first need maxed stats (obviously xD)
Don't worry about the flames, just attack them instead of trying to dodge them :D
When he overheats, attack him with everything, just don't let him attack you ;)
Also, never let him hit you, after you get hit there's a BIG chance (99.99%) of releasing all his flames on you, and when you are able to act again, he'll kill you easily (lol) and don't use stomp. It won't destroy any flame, and it will make you a target.
Also, there's a tip: Try to get 50000 thelemite and see what happens :3
Hope this helps.

For the last boss:

I beat him by charging (assuming you have the "invincible while charging" upgrade) until he gets close. Then I unleash the special attack and follow it up with regular attacks until he recovers (which usually happens when you auto-target a pedestrian or something and he gets away). I go back to charging and repeat.

This actually took me a while to figure out because I was using a game pad and you can't charge with a game pad. I actually thought the instructions just meant to hold in one direction :p

The trick to the last boss is

snagging that extra 50,000 thelemite after fully upgrading. I'm not even sure if he's meant to be possible before that point, although I bet people have done it.

Ugggggghhh this game is nearly unplayable coupled with the lock-ups that occur to just about everyone in every flash game ever which feel even LONGER here.

I seem to be the only person who can't get the Platinum medal in the Level 10 time trial (Our Parks). Any tips for that?

Found him really easy-less tries than the spiders. Jump above him, smash him to earth and then don't let him fly up again. As long as you keep hitting him into the ground, he's stunned and can't retaliate.

How do you beat the stomper at the last level?