The Yawhg is coming. In six weeks, it'll be here, and nothing will ever be the same. But you don't know that, because in Damian Sommers and Emily Carroll's gorgeous indie choose-your-own-adventure style game, you're just a typical soul living out your life on a week by week basis. The things you do with your time now just feel like the same ol' same ol' to you, but when the Yawhg arrives, the choices you have made will determine what happens to not only you but the town itself. Will you dedicate yourself to the arcane arts in the alchemist's tower, even knowing the potential for disaster magic can bring? Will you choose to try to bring law to the troubled slums, unaware of the inhuman darkness that will watch from the shadows? Maybe you'll spend some time attending royal balls, or tending to the sick at the hospital... though if you've come down with a certain affliction yourself, that might not be the best idea. Every action has consequences, and every action determines how ready you'll be when it arrives. 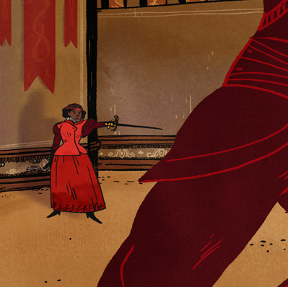 At the start of the game, you can select anywhere from one up to all four of the available characters to play with. Don't worry, all of them can be and do anything, so you aren't limited in any way. The game is turn-based, and each week you'll be asked to select what your characters do and where they go within the city. Once all characters have done something, the turn ends and a new week begins, six in all, until the Yawhg arrives. Each character begins with the same value in all six available statistics, ranging from physical strength to simple wealth, and performing actions in different locations causes these to raise. Fighting in the stadium, for instance, might give you a boost to your strength, while choosing to attend a royal ball at court could increase your charm. Simple, right?

Except each action will usually have a random event attributed to it that comes with a decision. When the patient covered in mysterious sores comes into the hospital one day, do you risk infection? How do you deal with the zombified critter your colleague at the alchemist's tower has just created? While these decisions will also influence your abilities for better or worse, how well you do at your chosen option will usually depend on whether certain statistics are high enough. If your charm is low, you might want to think twice about trying to persuade someone, or if you're not strong enough, running away might be a better choice than getting in a fight. These seemingly inconsequential encounters can lead to big repercussions or rewards later on, and you won't know which until you take a chance. Just remember to apply characters to certain professions and statistics whenever possible to make sure they're ready for the Yawhg... well... as ready as anyone ever can be when they don't know something is coming... 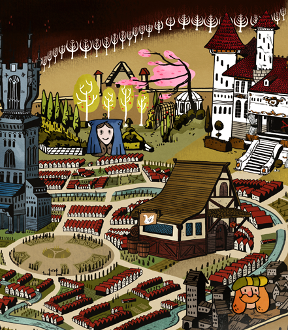 Analysis: For a lot of players, even fans of visual-novel style adventures, the hardest thing to take about The Yawhg might be the randomisation. While certain events only happen at certain locations, there's no real way to tell when and in what order even if you know they're there, so it's hard to really be prepared. On the other hand, that's also sort of the whole point of the game. Like the ambiguous menace roiling towards the town, the people you're playing as have no idea what to expect out of their daily lives. They don't know what's going to happen. They're just living as they always have, and sometimes life is unexpected in ways both good and bad. While the game does provide narration as you go, what it doesn't offer is characterization towards the people you play as at all, forcing you to construct their stories in your own mind. Those proper looking women could just as easily be warriors or thieves as the burly fellow could be a doctor or a courtly gentleman. One of my personal favourite aspects of the game was the way choices felt like they actually had merit and consequences beyond improving your stats because they would pop up again at some point in the rest of the game to show you the results of your decision. The Yawhg feels like it's about crafting lives, and even if the bulk of the story is left up to your imagination, it still succeeds wonderfully.

A large part of the appeal is the gorgeous artwork by Emily Carroll, whose designs breathe personality and a haunting storybook flair into the world. (And if you haven't read her chilling comic His Face All Red, you're seriously missing out.) Add to that a haunting and increasingly tension-filled soundtrack by Ryan Roth and Halina Heron, and you might just have one of the most exquisitely designed story-centric games out there. By suggesting more than it does outright stating anything and never painting you into a corner with its story, The Yawhg creates a world that feels drawn by your choices and ideas, in a world that feels rich with unspoken mythology and danger. Though a playthrough won't last very long, there are over fifty endings to discover, and the game's snappy pace makes it easy to want to jump right back into a new game as soon as you finish one. Rich in player-made stories and surreal, imaginative fairy-tale like atmosphere, The Yawhg is a simple to play yet compelling game that provides a unique and engaging experience.

I had never heard of this! And I'm a fan of Emily Carroll's comics, which are as equally gorgeous as they are utterly terrifying. I hope a demo goes up so I can get a taste of the gameplay.