The Wonderful End
of the World

Good news: The world is ending! Bad news: It's your job to gather up stuff on the earth to save for later. I know, I know, you're thinking to yourself, "AGAIN?!? But I just did that last month! I had to cancel my annual euchre tournament to collect stuff, and now you want me to do it again? Geez Louise..." 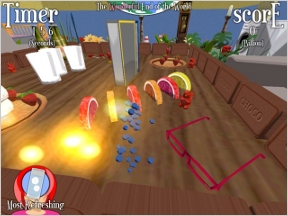 Don't worry, we promise it won't be as bad as last time. This time around, it's not just any old end of the world, it's The Wonderful End of the World. There, now doesn't it all seem so much more worth it?

Terra, the goddess of the earth, knows that the world's inevitable doom is coming, so she uses a puppet on the earth to collect as much stuff as she can, for rebuilding the world later. You can control the transparent puppet using the [WASD] keys and/or the mouse, or by using a gamepad, if you happen to have one hooked up to your computer. By moving the puppet into objects that are smaller than you, you can pick them up, and they become a part of your body. Be careful around larger objects, as they can bounce you away, causing you to lose time. But as more stuff sticks to you, you eventually grow larger, meaning that you can pick up larger objects. While you might start out a level picking up pieces of a model train set, you could end up picking up people, cars, and entire buildings.

There are 12 unique worlds to unlock, and three ways to play each. In Timed mode, you have about three minutes to gather up as much stuff as you can. In Timeless mode, you have all the time in the world, but still want to gather up the target amount of objects as quickly as you can. If you don't feel like taking on any specific goals and feel like going on a free romp, then Exploration mode is for you. Receiving high grades in the Timed mode unlocks more worlds and features.

Analysis: Again, I know what you're thinking: Katamari Damacy. And it's true, the basic concept of collecting random objects by increasing size is the same between both games. Dejobaan Games has managed to maintain a lot of the Katamari spirit, with quirky graphics, absurd game play, and worlds that encourage exploration and the desire to keep on collecting. 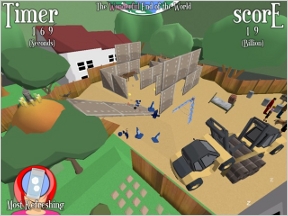 Audibly, The Wonderful End of the World might lack some of the quirks that the Katamari series had. Obviously, asking for the next big "Katamari on the Rocks" or "Lonely Rolling Star" would be a little much, but the creators of the game could have gone for a little more than some stock loops. They're not bad at all, but some might sound uncomfortably familiar from other games. And for those who loved every yelp and cry of every object picked up with a katamari, you might be a bit disappointed to find that only certain objects generate item-specific sounds, but it's still fun trying to hunt them down.

While I hate making constant comparisons to Katamari Damacy, it should be noted that the game play in The Wonderful End of the World is a lot more linear. While KD had a lot of levels with specialized tasks, such as collecting as many animals as you can or trying to roll up objects to make the most expensive katamari possible, the goal here is more to just roll up stuff, period. However, what this game lacks in game play diversity, it more than makes up for in atmosphere. You'll find yourself in awe at how brilliant and expansive the world can become as you grow larger.

If you've never played Katamari Damacy or any other Katamari game before, The Wonderful End of the World is definitely worth experiencing. If you've played KD only a few times and loved running around shouting "Save the pandas!" at random intervals, this game will be sure to bring back all of the amazing memories you had. If you're the die-hard Katamari enthusiast, you might see this game as a knock-off, but definitely one of the most spirited and impressive ones out there. The Wonderful End of the World is undoubtedly worth trying. You'll get stuck on it pretty quickly.

Euchre tournament? So are you from Michigan or Wisconsin?

eedev: The reference in the tutorial is actually for a game called Pro Wrestling for the NES. KoL used the phrase as a reference too, though.

About the game: Not Katamari for sure, but still fun. 12 levels seems a bit too short but the charm in each one is phenomenal and sometimes they play a "scale trick" on you... like in the "Skytop Mall" level where you start out devouring cars and then realize they're only toy size. Overall, pretty good.

Pretty good, but I beat the game before the demo was over. My favorite level was "Arcadion". I really like how as you grew, the games evolved.

Also, I'm a "Die-Hard Katamari Enthusiast" But I LOVE this game! If only I could pass Word Forge.

Why does it always say "most refreshing" in the lower left hand corner?

does anyone have a strategy in beating Word Forge? I can't seem to get any further than a B+!

Tofunaga: about Word Forge
I had very much trouble with this, also. It took me about 10 tries to get an A! However, I think these tips might help you

First, be sure to get all the single letters and small words around you before you leave the small circle you're placed in.
Second, Don't stop moving! This is very important because, especially in Word Forge, you have no time to spare!
Third, similar to the first, be sure to get almost all the words in the center square before you leave (all except the words "Hello World")
Fourth, Walk in the oppisite direction of the small letters on the "road" and be sure to grab the samll words to the left of the road, in the center section.
Fifth, grab the 3 "WEEEEEEEEEE!"'s on the upper ledge around the perimiter.
By this time you should be large enough the grab the moving letters in the lower section.
You probably won't have much time left after this, but then just try to grab any and all words that you can!
Of course, Pracice really does help, greatly!

I really hope this helps and I hope you can beat the level! Good Luck!

Now I need help with Cafe Internets, I, too, can only manage a B+!!

I have many problems with the Cafe Internets level, especially when i become large enough to start picking up chairs because the gaps between the tables aren't big enough to let me pass easily wasting my valuable time. I'm stuck on an A- score.

AH!!! EEIIIIIIII!!!! OH MAH GAWD! "huff huff" I am freaking out after seeing the spiders and the monster thingy on the construction level. Why, oh why?

In the very first level, there is a window, and if you look out it, there is more to the level. Only problem is that I can't manage to get out of it. Has anyone done this, and if so, how?