Please be aware of the developers content warning for this game, which will be quoted in the comment section of this review.

Waking up alone in the snow Annellie finds herself cold and disoriented. Luckily she is close enough to her house to make it inside to warm up. Instead of a warm fire and a rush of servants and doting parents, Annellie finds an empty home lined with dying flowers and torn pages smeared with red ink. But the house isn't as empty as she first believes, and spirits are roaming the halls. Annellie must slowly gather her thoughts to find out the truth in this free horror indie game, The White Path. Arty Vn's game will have you searching through the house for clues and items needed to solve puzzles and soothe angry spirits. Use the [arrow] keys to move, [Z] for your main action and [shift] to run. Be sure to save often in your menu, using [X], as death can be waiting just around the corner. With four different endings, you'll be able to follow the White Path to your success or your endless misery. 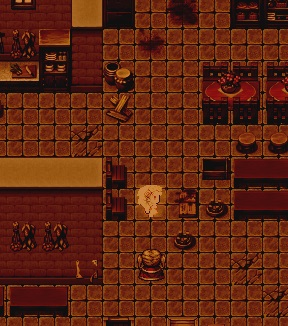 Arty Vn's first game seems to be inspired by Ib and The Wicht's House, though it's not quite on their level yet, or as scary. While there is a foreboding feeling weighing in the air, and a few jumps of things dashing across your screen, it isn't too terrifying, and some of the sudden deaths feel tacked on. Without save states around to remind you to do so, you have to pull yourself out of the story to save on your own. All that aside however, The White Path is a fun little adventure with a clever story. As it's not trying to be a game that keeps you glancing in the shadows, it feels lighter to play. There are areas that will have you quickly dashing out of the room just because it's too creepy, but the tension isn't always present, letting you take a breather and actually ponder about what is really happening to poor Annellie. The four endings are determined by choices you make at the end of the game, so if you save often you won't have to replay all of it to get all the pieces of the story. The White Path is a short, creepy adventure most will enjoy so bundle up... it's cold out there.

"The genre of this game is paranormal/suspense bordering horror, though the horror elements are light. However, this game contains

mentions of death and mental illnesses, thus if you find this offensive or harmful in any way, please do not play it.

I just got DONE playing through an RPGMaker game for the month of October! Oh well, I'll embrace this one as well. I'm trying to play as many scary games as I can before the month is over. So far I've got 9 done.

Working on Luigi's Mansion: Dark Moon (So much fun!). You may have noticed a pattern above and yes, I played Yahtzee's Chzo Mythos games because 5DAS was the first indie game to truly scare me when I was 15. I was afraid to be alone in another house with strangers awhile after that.

ooh. I haven't heard of some of these. I'll have to check them out.
=3 Thanks!

I don't know about this one. It's full of cheap deaths. I died

. Thankfully I can save anywhere so it's not too much of a problem although most of the time I really didn't see these coming.

Here are the decisions you need to make to get each ending.

I should've read the full entry - I didn't figure out the shift key to run until about halfway through the game! :P

Cheap deaths and item hunting is difficult and sometimes counter-intuitive.

I do recommend this game with the following caveats:
1. Save very often
2. You may have to use a walkthrough to find things.

For the very first part of the game:

I was a little frustrated by all of the paths that I could not take, and once I actually found a sharp object, I had to guess at which hedge to cut to get the key in order to get into the house, which was not fun. However, if you can make it past the initial frustration, it is a high-quality dark and interesting game.