The Visitor: Massacre at Camp Happy 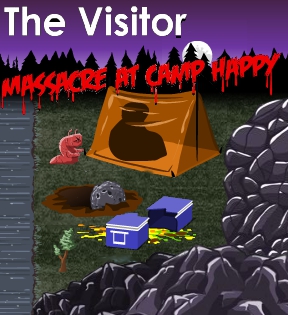 While there's no denying that Will Smith and clever socio-political commentaries have done a lot of great things for the "space monster" genre, I say it's high time it gets back to its screamy, bloody roots. The Visitor: Massacre at Camp Happy is ClickShake's newest horror puzzle game, does just that. In this slippery, squelchy follow-up to the original, you once again take up the noble mantle of interstellar spaceworm of death, here to devour animal flesh and gain their abilities. Mmmm, otter! Good for what ails ya.

This time, the Visitor arrives via meteor to the no doubt completely appropriately named Camp Happy, a veritable buffet of varied wildlife and oblivious campers... your real goal to find and devour in any stage. Manually control the Visitor with the [arrow] keys, maneuvering around the map, and try to make your way towards the tender human flesh in each level. You can devour any creature equal to your size or smaller by pressing the [spacebar], to not only gain a boost in energy and size, but also take on any special abilities that friendly forest critter might have had; birds will allow you to fly, for example, while certain mammals will allow you to make your way through dense underbrush. The trick is not only knowing what animal is best for getting you past certain obstacles, but also to make sure you're neither too big nor too small for certain areas.

Your progress is automatically saved, so if you leave and come back to the game, you'll start on the last level you didn't complete. Take enough damage, and your current Visitor will meet an untimely end, but another will arrive immediately to take its place, forcing you to restart the stage from the beginning. It's like a great big, dripping, fanged circle of life. Let's see you try and make that sound appealing, Tim Rice. 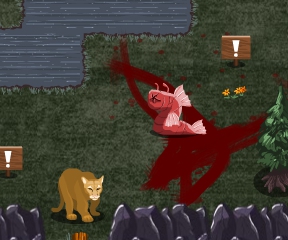 Analysis: If you played the original installment, you were probably as surprised as I was to see the gleefully sadistic and disgusting point-and-click puzzle screens replaced with some good old fashioned action/puzzle gameplay. Personally, I don't think this is a bad thing; The Visitor came out in 2007, and to release more of the same three (almost four!) years later would have reeked a bit of beating a dead horse. (A smelly process to be sure.) Camp Happy is actually what I wish developers would do more of; a step in a new direction. It keeps the original oddball concept, but this time there's more involved to playing than just clicking a series of hotspots in the correct order. The gore is as over-the-top as ever, and combined with the bright visuals lends the game a certain morbid charm that makes it fun to explore.

It's a lot more hands-on... or, uh, flipper-on, depending what you've just taken a bite out of. Most of the early levels have you just wandering around the area, taking stock of what animals exist and what order you need to chew their faces in. It's figuring out what animals are going to impart some special ability and which ones are going to shrink and grow, like Willy Wonka's factory via Quentin Tarantino, that makes the experience a little bit trial-and-error at first. It would have been nice to see a few more abilities featured, too; the game features such a unique lead character that I wish the gameplay offered a bit more surprises to take advantage of that. An underwater stage where you were stuck in fish form, perhaps, or a titanic squirrel/raccoon battle that took place in the treetops.

While it might not test your skills, The Visitor: Massacre at Camp Happy is still a weird, fun take on the puzzle genre, with all the splats and cheek you've come to expect from its developers Jay "Zeebarf" Ziebarth and Steve Castro. It's silly, it's gross, and it might be just what you need to rinse the oppressive taste of Christmas cheer out of your mouth after the holidays. And the best part is you get to live out the completely normal fantasies we've all had about being a terror from beyond the stars that craves mountain lion! Right, guys?... guys?

i cant seem to eat the turtle. any help??

You need to eat some smaller animals first, and watch out for their snapping.

@Stine, you need to be bigger.

eat a pig/boar. you may not think you can but it is possible. it will make you big enough to eat the turtle

To be honest, I loved it, but stopped loving it after level 7 or 8.

The annoying thing was: it got repetitive! Each new level I hoped a new creature would appear, but later on it's just a labyrinth getting bigger and bigger.

But besides that, the more free-play style of the game was indeed fun, as you are not restricted to point-and-clicking everything at random, and can roam about at will :D

Seem like I managed to trap myself on level #2: I'm atz a spot with two exits: one through water and another on a log - but I can't swim (the last animal I ate was a puma or what) and I'm too big to use the log - and there's no mice present to make me any smaller or turtle to eat so i can go in the water. Seem like the only way out is to restart the game. If t's really the case and it's not just me missing the obvious here, it's faulty level design.

Update: it was me missing the obvious - I just realized that though I cannot GO into water, I can eat the fish in the water from land...

Super fun! I enjoyed killing people a little too much :)

Game was great until the last level, which is just utter frustration. It felt like pure luck when I finally beat the last level on my 12th or 13th try. Left a terrible taste in my mouth... Otherwise though, great game.

I prefer Zeebarf's point and clicks to this. The animation was great as usual, but honestly, I thought it was sort of mediocre. But still sort of fun.

Either the game doesn't say how to climb trees (after eating a land creature), or I am being unusually blind. Either way, I can't get past level 2. Help!

the cougar can climb

Ok, so. How to get past level 2? Once you get the fish upgrade, return to the first part of the map and eat the rats. Then swim back, go to the wood and get past it, and eat the human.
Happy devouring!

Bryce, the trees that you climb are large and blue-ish. You just walk into them but you need "arms."

Do you have to start ALL OVER if you close the game?

Hey, I LOVE THIS GAME OMG haha, Lol Love it.

I wish someone would enlighten me about how to take the level with the swimming blonde girl. It's almost-impossible to even get past the first part into the water, since that

son-of-a-motherless-squirrel can't be snuck up on without crawling all over two hungry, hostile bigger critters

but then, there does not seem to be any way whatsoever to get

back through the trees and into the water. You are either too small to eat the fish, or too big to get back across the log from eating the required climbing animal, the cougar. WTF? What am I missing here?

Phooey, that took a while. Done it all. :D

280 Views
0 Comments
chrpa— Jayisgames needs your help to continue providing quality content. Click for details Welcome to the Roundup 64 with three games! As mentioned in the previous roundups, only odd-numbered episodes are featured since even-numbered are for Robin Vencel's patrons (the...  ...