The Vanishing of Ethan Carter

Content Advisory: This game features a small-minded character who uses several vicious slurs against the LGBTQ community. Discretion is advised.

In The Astronauts' highly anticipated indie horror adventure game The Vanishing of Ethan Carter, it's every parent's worst nightmare when, as the title suggests, young Ethan Carter goes missing. Before his disappearance, he'd been sending you letters... you, Paul Prospero, a detective with a reputation for the occult. Nobody believed the things Ethan told them about... not the police, not the priests... but you did. Now you've come to his hometown of Red Creek, which looks like a quiet, obscenely picturesque, yet oddly quiet, town set deep in the forest, but looks can be deceiving. Billed as a "non-linear narrative", The Vanishing of Ethan Carter offers little to no direction when it drops you unceremoniously into the game, and it's entirely up to you to figure out where to go, follow your own clues and leads, and solve puzzles with minimal obvious direction. It's a slow, thoughtful experience with abstract puzzles and a heavy focus on storytelling in a gorgeous, immersive environment, made more for fans of subtle, classic horror than splashy, flashy scares and thrills. Though only a few hours long and lacking in replay value, The Vanishing of Ethan Carter is an extraordinarily beautiful and unsettling piece of narrative fiction that uses some knock-out imagery and shocking events to take you along for the ride. 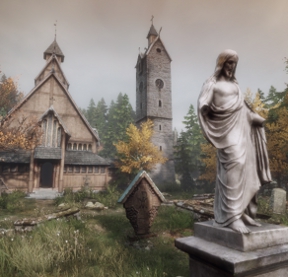 Gameplay is fairly simple, with [WASD] or the [arrow] keys to move, [shift] for sprinting when held, and a plain ol' click to interact when the option pops up in the form of text over an item. Paul's power is sort of poorly explained in the game, at least as far as making progress goes. It allows him to see things others can't... psychic manifestations, spirits, illusions. Most notably this is done to get information from the corpses of people, though if you only get a small window when you use Paul's "touch" ability, it means you're missing information. To get more than a glimpse, to see the full picture, you'll typically need to recreate scenes based on evidence you find around them, and then sort the things you've discovered in the proper order to show what happened. If an item's name begins swimming around the screen, look around until it resolves itself into a single instance and then click and hold to get a psychic vision of where the thing you're looking for is. It's important to note that you cannot save manually, and your progress is only saved when the game saves it for you, usually after solving a psychic puzzle. 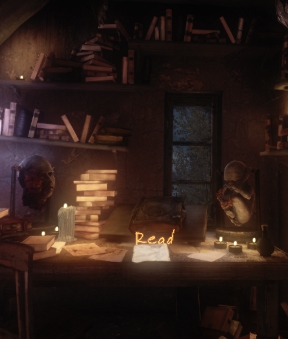 Analysis: The Vanishing of Ethan Carter is not going to be for everyone, largely because not everyone enjoys tramping back and forth through the woods and ruins for hours searching for a tiny clue they might have missed, which I suppose is as good a test as any as to whether you might have missed your calling as a real detective. Apart from its gorgeous soundtrack, the game is simply silent most of the times, with narrative only coming at certain points from Paul, even when it might have fleshed out the experience a bit to have him offer up some more observations as you explore. It's hard to tell if you're making any progress or not when few things you do have discernible impact and Paul is completely mute, which doesn't really make sense of a person coming across the things he is. Since the game is non-linear, you can solve any of the mystery scenes you come across in any order, but unless you like backtracking over huge areas, you're probably going to want to do your best to crack each puzzle as you come to it. At the same time, however, it's frustratingly easy to miss scenes if you don't stumble across their little puzzle, especially with the map being as large as it is. Even with all that wandering around, however, this still isn't a very long game, clocking in at just a handful of hours for the average player, and it made me wish some of that trekking had been fleshed out a little more so it felt more like a world and less like a set for a stage.

In a lot of ways, then, The Vanishing of Ethan Carter is best approach as an interactive narrative, and frankly, that's where it excels. It isn't enough to just be beautiful, though it definitely is that with its stunning lighting and environments, to the point where my husband, walking by, though I was watching a live action movie. Through the scenes and notes you discover, Ethan becomes a very sympathetic kid, and the way the game uses symbolism and incredible imagery to tell his tale sucks you in. The ending honestly feels a little abrupt, and while some may call it predictable, or even fitting, just as many may view it as trite in a way that undermines the rest of the experience. For my money, I did feel the ending was appropriate, but it felt as if it should have been a bit longer in coming to build up to it. Though there are moments where the game employs a few jump scares, perhaps most notably an (annoying) mine maze sequence, for the most part it's more about subtle mood and atmosphere, blurring the line between fantasy and reality. It's a melancholy, uneasy sort of horror, and it'll hold you captive from beginning to end if you're the sort of player who also likes to sink down with a good book and their favourite drink and not move until they're done.

Windows:
Get the full version (GOG)

To bad there's no demo.