The best games are ones that make you believe you are a part of one story, while another story plays out quietly behind the scenes. In The Ultimate Celebration, a poignant indie platformer from Brian Soulliard, you play a jolly little Party Dude who's only desire is to throw a party for all 20 of his friends. In the real world, you would just call them up on their cell phones and invite them, but where's the fun in that?! 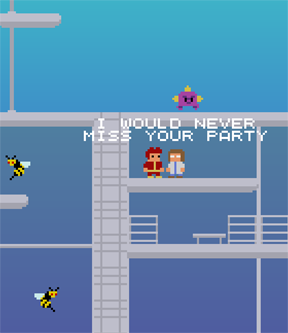 Press the [arrow] keys to make Party Dude jump and run around this beautifully designed pixelated world. Be sure to dodge the bees, bears, and piranhas that couldn't care less about your party plans, and make good use of the jumper platforms, which can be really fun to get lost on, jumping up and up seemingly forever, a la Sonic the Hedgehog. Likewise, there are water currents that will send you in any direction in the blink of an eye. There are tons of other obstacles, none of which are fatal, and the worst they will do is push you out of the way, a nice little innovation to the fall and die trope of most platformers.

The 8-bit retro graphics are charming, as are the different locales — from castles in the sky to laboratories full of bees. But what makes this game really stand out is the story that plays behind the scenes, on the edges of your awareness. The music, a pitch-perfect score by the talented Filippo Beck Peccoz changes note for note with the background scenery. But don't think this is just some artsy concept game. Story or no story, this is a genuine platformer with lots of well-placed challenges that will having you coming back for more, if only to beat your pathetically low previous score, of which you can be assured you will have. Also, speed freaks will be happy to know that the game was designed specifically for speed running.

Intrepid Jigsters will now be cracking their knuckles, ready to fire off a flaming screed in the comments saying that this game is a blatant rip-off of Tanaka's Friendly Adventure, a game we featured back in 2009. But you would be wrong! While the opening premise of the game — finding friends for a party — is the same. The ending, set-up, and themes are like night and day.

Not everyone will be wowed by the ending. In fact, the most likely response for most the first time around will be, "Huh? What just happened?", but this is a game that, like a good movie, gets better with each play through, even if it's just in the inner reaches of your own mind.

It took me several tries but I finally beat it. Really amazing game, and free, and everyone should experience it.

@Alex M, that's awesome! Got any tips for the rest of us?

To be honest, I wasn't sure if anyone would ever have the dedication to find all 20 friends. A few people have by now, and it makes me happy to know that people like my game enough to dedicate their time to it. Congrats on the accomplishment!