The Treasures of Mystery
Island: The Ghost Ship

What would you do for a million bucks? Thanks to the popularity of reality TV, we now know that there is relatively little people won't do (I wonder if they remained so enthusiastic when they learned how much of that will go on tax?). But stepping onto a haunted island? That's not in all of us. Fortunately it's not much of a thing for one young writer, which gives us an opportunity to experience the adventure through her in The Treasures of Mystery Island: The Ghost Ship. 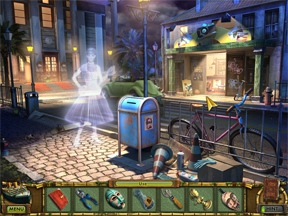 This is not a hidden object game, but instead very much a first-person adventure. There is plenty of object-hunting, but you are never presented by the standard laundry list where you have to find a dozen items, only one of which ends up being important. No, here every single thing you have to dig out of a scene has a role to play — which means at most three or four objects can be hidden, but usually there are just one or two.

To be clear, there is no treasure in this game (not unless you count a million dollar reward for clearing all the supernatural activity from the island). But there is a ghost ship and a whole lotta haunting. Your first ghost, in fact, appears in the intro movie and the spirits of the departed are all over the place. In this adventure game you have to discover why they are walking the earth, in turn preventing a much bigger disaster from happening. The clock is even against you, with regular countdowns to the inevitable eclipse that will bring something nasty to the surface. This countdown is entirely cosmetic and only rears its head when you enter certain new scenes, so there is no threat of running out of time. But it is a very nice touch.

Finding pieces of objects and then figuring out what to do with them is the core of Ghost Ship's gameplay experience. The adventure is split into four parts, each divided into multiple areas that you will revisit frequently while digging through the challenge. This is a fairly long game — even on a steady clip where you know exactly what you are doing, it takes more than four hours to complete. More salted players can up the odds by playing on the higher of the two difficulty modes. All this does is increase the hint system's reload time to two minutes and not change the cursor when over a highlighted area. That sound like little, but it really ups the challenge in an already challenging game. 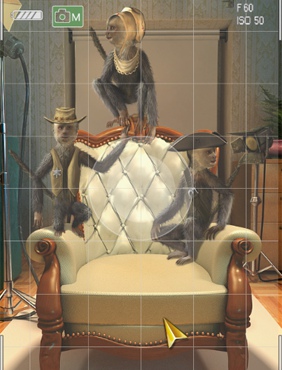 The myriad of objects you use is broad and simply going around randomly trying everything with everything else is laborious and sometimes impractical. As you progress, new areas in a scene can be activated and new objects can appear, so adventurers have to vigilantly move around the various scenes, trying to figure out their way forward. Whereas many such adventure games degenerate into a connect-the-dots affair - solving one puzzle inevitably leads to the next, etc — Ghost Ship is elaborate and expects you to do a bit of thinking. In ways it resembles the Mystery Case Files games, but without the hidden object sequences and with only a handful of traditional "puzzles". Most progress is made by finding objects and then figuring out what to do with them.

Analysis: The Ghost Ship is a gorgeous game with a beautiful soundtrack and handles its theme with enthusiasm — right down to the lack of characters you encounter. The sense of looming disaster and eerie isolation is handled brilliantly and even the interface design is great. For example, if a part of an object is hidden and requires an additional action to reach, it flashes in red — this has saved so much agony pining over a scene, trying to find a piece. The hint system is also excellent, only delayed when it reloads.

But some of the puzzles aren't as intuitive and the game doesn't always deliver clear clues. Sometimes you will be stuck until you click on a certain highlighted area, which in turn would unlock a new hidden object or activate new parts of other scenes. These events aren't always obvious and, at least in this reviewer's case, on occasion had to be highlighted through the hint system. But pixel hunters and detail hounds will revel in the challenge.

Honestly, though, the glimpses of frustration do nothing to take away from this game. It makes for a nice challenge in a game world that draws the player in from the get-go. The Ghost Ship also smartly avoids using clutter and familiar puzzles to extend its lifespan. Instead the several hours it packs feels fresh and engaging. The Treasures of Mystery Island: The Ghost Ship is one of the best adventure games we've seen this year. Sometimes I struggle through these types of games, mostly the result of boredom. This title? I played it twice — in a row.

9. Temple of Fire and Ice

Chapter 2: Southern Coast of the Island

35. Outside the Translator's House

Chapter 3: Central Part of the Island

56. Outside the Pyramid/Shaman's Room II

69. Outside of the Pyramid/Shaman's Room II

Chapter 4: Northern Coast of the Island

9. Temple of Fire and Ice

Chapter 2: Southern Coast of the Island

35. Outside the Translator's House

Chapter 3: Central Part of the Island

56. Outside the Pyramid/Shaman's Room II

69. Outside of the Pyramid/Shaman's Room II

Chapter 4: Northern Coast of the Island

What exactly happened to her friend? It made no mention of her friend in the end.

enjoyed this game - also played it twice in a row. Just a question - what are the beyond objects for?, what's the point (benefit) to collecting them?