Pity the poor royal court of the 18th Dynasty of Egypt. The exhausted souls just finished uniting Egypt in order to keep the gods happy and now they are faced with a new challenge: travel down the Nile and rebuild temples before the gods start getting all explodey on their butts. And all of this must be accomplished while the royal architect is severely under the weather and the royal cat has gone AWOL. Pharaoh Touti and company are back in BlooBuzz's (formerly Wendigo) latest time management strategy The Timebuilders: Pyramid Rising 2. 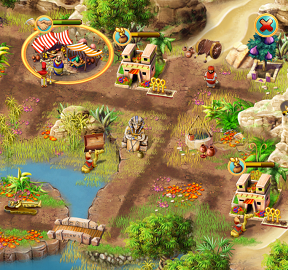 There is an actual story here but what's important is the strategy in the game rounds. You begin each scene with a particular set of goals to complete and a certain amount of time in which to complete them. This town might need some new housing, another town might need a port, or perhaps one of those damaged temples needs to be repaired. As you enter each new area one thing will be clear: get it done quick and right.

Gameplay in The Timebuilders series is very much in the mold of Royal Envoy or Build-a-lot, with blank lots that can be turned into housing or commercial buildings depending upon the need. Houses generate rent which enables you to buy materials to create more housing for other buildings, and each house can be upgraded three times. Commercial buildings include a quarry to produce building materials, a market in which to trade, and a bank which can earn interest on rental income. Other sources of income include flowering plants and trees that can be harvested for market and ports in which all sorts of items can be bartered. 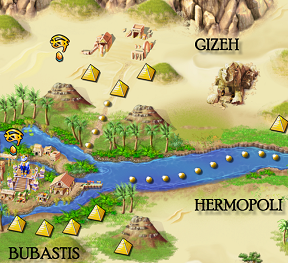 As with the first Timebuilders: Pyramid Rising, there can be obstacles in the paths between building plots, including bandits who need to be bribed, merchants who insist on a trade, and crocodiles who just want some sweet, sweet flesh and won't budge until spit upon by a camel or trampled by an elephant. Rounds can also feature hidden bonuses including golden sarcophagi which can be opened for a helpful prize (money and materials) but which can also hold a mummy which will interfere with your workers and rent gatherers. Buried treasures (if you can spot them) are even more helpful if you can reach them. The scene is complete when all goals are accomplished and the quicker it is completed the more bonus points earned. These bonus points can be spent on one-time use bonuses at the beginning of each scene like extra money, rent increase, extra speed, etc.

Analysis: BlooBuzz has produced a fast, furious, satisfying mesh of real-time strategy, simulation, and time management which gets more frantic the further into the game you get. For those who like this type of strategy gameplay then The Timebuilders have once again delivered with fun gameplay, cool graphics, and amusing little animations everywhere, including the "Walk Like an Egyptian" chorus which concludes each scene. 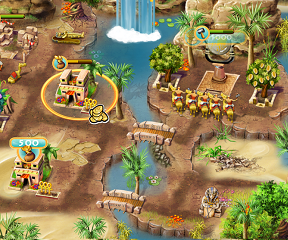 The Timebuilders: Pyramid Rising 2 seems to be a continuation of the first story, which might be confusing if you've never played the first, but not terribly so. Fortunately the story scenes are a very small portion of the gameplay, leaving lots of time for strategizing. Unlike last time where you either got a golden scarab or not (depending on the completion time of each scene), this time there is a gold, silver, and bronze time, each earning more of those precious points for the bonus goodies available at the start of each round.

Gameplay hasn't changed much, just a few tweaks here and there to liven up the play. The buried treasure and the wandering mummies add a nice touch, as do the one-time use bonuses like the spyglass (which allows you to peek into all closed boxes, chests, etc.) or the freezer which suspends the playing clock for a set amount of time. Very similar gameplay, but not too much so. If there is a downside it is in the rather dreadful cut-scenes that tell the story. There is no way to click each bit of dialogue to go quicker unless you skip the entire scene altogether, which is not a bad idea considering that they are static, flat cartoon panels. An odd choice for a game that bursts in the gameplay rounds with amazing animations packed into every inch.

Despite the flaws, The Timebuilders: Pyramid Rising 2 packs some fantastic time management gameplay, including multiple rounds and bonus rounds. If you don't care about the story just skip it, and enjoy the architectural madness as you once again build your way through ancient Egypt. And hey, maybe this time that annoying royal cat will stay lost.

Oof, this is so much less polished than the Royal Envoy games. I got sick of it after just a few levels.

This series is amazing! Fun game play and love the little dance at the end. Looking forward to the next one!