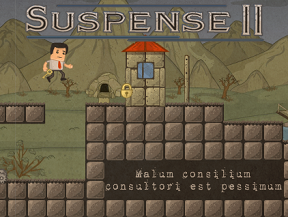 For some reason the public has an inclination towards a fascination with death. Some prefer gore, while others are moved by an emotional, but dignified passing. Enter The Suspense II, a platform adventure game by Black Square where you can switch between life and death to possibly escape your own fate. Using your [arrow] keys to move, traverse each level to find the key to unlock the door to move on. In order to get this key you will have to switch between the realities of life and death by pressing [S]. As you go along you will meet people that you may greet by pressing the [spacebar], which also allows you to grab crates and move them, as well as use levers.

The most difficult part of this game is timing. During several levels you will have to switch between the two realities quickly in order to hop on a moving platform, and oft times this can be tricky to accomplish. However, it's not impossible and once you hop off that platform and retrieve a key you realize that by golly, you're awesome. The subtle difference between the worlds is pleasing to the eye and manages to be dark without feeling as if you entered a haunted house. Honestly, death never looked so good or seemed so fun.

Great game, but gods that last level is hard. I'm also a little baffled by the protagonist's office worker attire - the atmosphere makes it seem like a medieval peasant getup would be more appropriate.

I loved this game, 5/5 though I have to say overall I would have orange rather than yellow, rating reasons in spoiler

The whole ambiance was very very dark, and the hanging and crucifixion levels were especially so.

Do not get me wrong I loved the game, and yes I looked and by your pure blood and gore ratings this was yellow, but I think there was something darker about this that rated an orange - on a subjective judgement, that is a just my 2cp


The whole thing for me was dark and great and I loved it ...

[Thank you for your insight. It's always hard to tell how the audience will feel about a game so it's really nice that you've said something. I'll change the rating for that now. Thanks so much!-Meaghan]

...am I the only one who's just a teeny bit tired of arty platformers where the final level is "There's no escape, the end"?

(Or is there a supersecret bonus ending that I've missed? In which case, never mind.)

so i left the last stage without playing

I was really excited to find this game! Ever since Majora's Mask I've been hoping to find a game that handled this sort of layered-world-swapping well on a smaller scale (Majora's Mask wasn't exactly small scale hit S while jumping sort of thing). The puzzles were simple but clever enough and building well off of each other.

Aaaaand then I got to

the end. I'm figuring from Daibhid C's comment above that falling through a platform for no reason and suddenly dying for real is actually the end? The game wasn't good enough to do a full replay just to test if that was the real end or not.

When you were helping the grim reaper in the previous scene, did you really expect him to let you go!

Just a quick rule of thumb: You know a game's controls are terrible when they make you wonder if your controller or keyboard is broken.

This game's controls are terrible. This is not a good platformer. And you know, it's okay for most puzzle platformers to be bad platformers, as long as the puzzles are based on something other than the player's platforming skills. So, for the future, either make sure you controls work or don't put anything like level 10 in your game.

Finally gave up just before the very end of level ten. The rest of the game had well-placed checkpoints that made failure less frustrating; why leave them out of the last level?

It is possible to become stuck on level 4 if you hit the checkpoint without collecting the key.