The Story of Red Cloud

The Story of Red Cloud is a massive adventure-style mod for the sandbox building game Terraria. Citing inspiration from The Legend of Zelda and Dark Souls, the mod takes a massive step away from its source, knocking out most of the creative aspects in favor of traditional combat and exploration. This isn't the Terraria you've grown to love, nor is it a happy romp through a flower-filled land of bunnies (though there are bunnies). The Story of Red Cloud is a challenging game filled with secrets to find, items to hoard, dungeons to explore, and gruesome deaths to narrowly avoid. 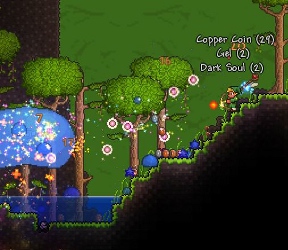 New to Terraria? That's just fine! The Story of Red Cloud doesn't require any knowledge of the original game, though if you're familiar with the set-up and controls it will certainly help. For starters, you need to own a copy of Terraria, which isn't a big deal now that the game can be found for a low price. Once you have the game and install the mod, simply move with the [WASD] keys, use the cursor to aim, the [left] mouse button to attack and the [right] mouse button to interact with things or use your secondary weapon.

Exploring the impressively large world of The Story of Red Cloud, you'll find a number of different environments to poke your nose in, ranging from towns to swamps, temples to mountains, and maybe even some underwater bits, too. You can interact with chests and barrels and the like, gathering items to add to your collection and keeping the best equipment for your own use. Enemies are all over the place in this game. It seems like half a dozen of them are on your tail at every turn. You can fight them off most of the time, but what you really want to do is stand back and deal with the situation logically. Combat can get you into trouble, and death can be a big setback in The Story of Red Cloud, especially if you nudge the difficulty level up to include permadeath! 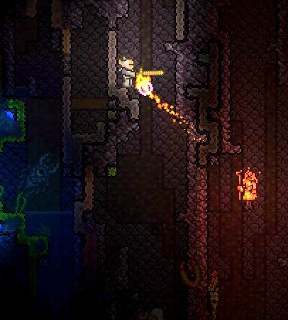 Major changes from Terraria to The Story of Red Cloud include a narrative-driven plot (though it's light on text), almost 200 new items, weapons, and pieces of equipment, eleven new bosses, a dozen unique dungeons, a custom soundtrack, and a hand-crafted world where paths are carefully laid out to lead you to towns, dungeons, caves, and hidden secrets.A lot will be familiar to anyone who has played Terraria, but even more will be brand new.

Analysis: The Story of Red Cloud may be a mod of Terraria, but it plays and feels like something completely different. There's no crafting or building or house decorating, but you can place a few blocks, destroy some blocks, and fight plenty of foes. This is an action adventure game at its heart, so even though it looks like the friendly world of Terraria, it's an entirely new experience. The inspiration drawn from Dark Souls and The Legend of Zelda really does it justice, so if you're familiar with those games, you'll know what to expect here. 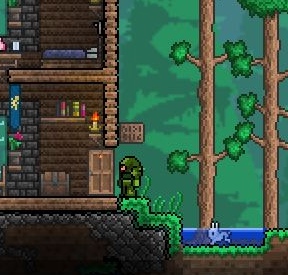 The Story of Red Cloud was created by Tim Hjersted along with a number of folks from the Terraria modding community. We don't often feature reviews of mods on JayIsGames, largely because they tend to require convoluted set-up procedures, but The Story of Red Cloud is a notable exception. A handy installation guide comes with the download, so once you have your copy of Terraria ready to go, you can get the mod up and running within just a few minutes. All you have to do is install a mod manager and a launcher, then copy some files to folders you create. It isn't as awkward as it may sound, and it's a safe process that won't destroy any existing data you have. Plus, The Story of Red Cloud is totally worth the effort!

If you can deal with the high difficulty level and play the game cautiously, you'll find very little to fault with The Story of Red Cloud. Combat isn't as precise or engaging as you might expect, as it is built on Terraria's loose model of attacking, but you quickly adapt to the inexactness of swinging a sword or firing a bow. Before you know it, you'll be dealing multiple blows with a single swing, like a boss!

Good mods can be a rare thing, and completely new adventures of this nature are even less common. The Story of Red Cloud takes the soul of Terraria and sticks it in the body of a challenging action adventure game stuffed to the brim with items, enemies, and areas to explore. It distills the best bits of the genre and expands them to epic proportions, so you get more of the things you love without having to deal with terrible storylines, awkward gameplay gimmicks, and the like. And, while Terraria was obviously not made for a game of this nature, somehow it all works out well in the end.

Psh, easy to install? I think not. Theoretically it should be easy enough, but when the game launcher gui and tconfig both refuse to install properly it kinda ruins everything...

For the record, I never said it was an easy install, I said it wasn't as convoluted as many mods. Easier, yes, but since it IS a mod, it's more than just click and play. Sorry to hear you're having problems, troubleshooting can be a pain, no matter what you're installing.

You might want to have a look at the launcher/tConfig pages for help:
http://www.terrariaonline.com/threads/terraria-game-launcher-gui.64759/
http://tconfig.wikia.com/wiki/TConfig_Wiki

It wasn't too bad to install for me. The installation guide was a bit vague at some times but I got it working after a few snags. So far I've really enjoyed playing this mod. I haven't gotten too far yet, but I've been enjoying every minute of it.

Well this is a shock. Seems like I've been IP banned from the Terraria website, but I have never once been on it before. :\
Are there any alternative places to download this?

@kleril: Sure - the terrariaonline page refers you here for the download.

I can't get this to work. Or I'm missing something obvious.

I follow instructions to the letter and come to the part "now start the game as normal and enjoy". I start the game, it requires me to create both the character and the world, and then the game starts.. as normal. No red clouds or new stuff or nothing, just me, guide and good old Terraria.

I've tried re-reading instructions but I'm almost positive I didn't mess anything up. Color me disappointed. :(

baba44713 the instructions are a bit vague on a few points but it does work. You do have to create a new character but NOT a new world. If you copy the .wld file included into the proper tconfig world folder then "Red Cloud" will show in the world list and off you go. I think the problem catching people out is that the proper folder isn't created on a fresh terraria/tconfig/launcher install, you either have to know where tconfig looks for worlds and create the folder by hand or create a test world at which time the folder is correctly named and created in the proper place.

As for whether it's worth it I'm still undecided, like a lot of mods you have to restrict yourself from some normal Terraria game mechanics and the line between what is in/out isn't all that clear.

Good news, I got it working.
I'm not entirely sure what fixed it, but uninstalling everything and redownloading everything then trying to reinstall with my firewall and antivirus turned off seemed to make it work.

So very glad I persevered.

I just beat the Ancient Jungle Wyvern (custom boss of the forgotten city), but didn't get any special item, even though it was heavily implied that it was going to give out a required tool. Does anybody else know what he's supposed to give? I'm worried that he was in a wall when he died and destroyed the item somehow. If he gives out the next pick or drill then I'm stuck here.

Hmmm... If this works with the latest version, I'll give it a try