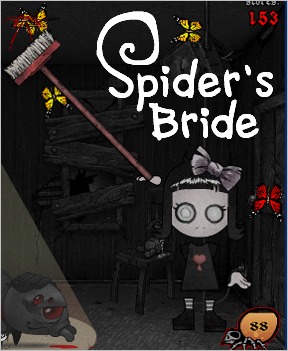 For most of us, spiders are reason to do extremely ridiculous and frantic ew-ew-ew dances whenever we suspect they're near us. This means spiders are probably pretty lonely, but it's not all bad. Spyke Games is here to tell you a story of love surpassing all odds, and bug juices in The Spider's Bride, a fast-paced game of mop-balancing skill. The Bride will do anything for her dear Spider, including bashing dozens of helpless butterflies for him to feast on. Ah, l'amour.

Taking place in a cozy little love nest, the game has you wielding a mop to crush butterflies. Sound easy? It's not, since you accomplish this with the broom balanced on the palm of the Bride's hand. Her hand moves with your mouse, which you move around the screen to try to keep the mop balanced. Move your mouse a little farther away, and she'll follow, but keep an eye on the mop. If it falls, it kicks up a cloud of dust which causes you to lose time. If you need to take a breather, hit [space] to pause the game.

Butterflies hatch from larvae in the bottom left corner of the screen. As they flutter about the room, push up quickly with the mouse to crush them against the ceiling with the mop. Bonuses are awarded for killing more than one at the same time. Keep an eye on your time at the bottom right, because if time runs out, you'll lose the wave, and Spider will lose some health. If his health runs out, you lose the game.

With simple controls and a nice, compact little package — twenty waves — The Spider's Bride is easy to pick up whenever you have a minute. As the game progresses, different types of butterflies are introduced, and you'll have to watch out for bees as well, which can sting you and cause you to flinch. Beat all twenty waves, and you can receive some very exclusive wallpaper featuring our star-crossed love birds, which is, um, a reward, even if I'm not certain I want Spider's oddly suave mug staring at me whenever I boot up my computer.

Analysis: My initial reaction to Spider's Bride was bewilderment. What was happening? Why was a spider sporting a toupee? What had those butterflies ever done to me? More importantly, why the heck are they so slow? Butterflies take their sweet time flapping up to a height that lets you get the mop under them, and a few times I lost a wave grinding my teeth because they were dancing around somewhere in the vicinity of the Bride's shoes. It didn't happen often, but I still felt cheated whenever it did. There were also one or two occasions when my mouse ventured outside of the realm of the game window accidentally, causing the mop to temporarily become "stuck" and lose a few seconds of play.

The game isn't going to appeal to everyone, partly because of its straight-forward premise, and partly because of just how creepy it is. The butterflies splatter like blood-filled balloons when you hit them, and Spider crunches down their corpses with relish. But even with the Bride's vacant stare and unsettling smile, it's still strangely pretty, as well. Character styles and themes are reminiscent of Roman Dirge's Lenore, or a film by Tim Burton. Or, in the case of Spider's immaculate moustache and red eyes, my own deepest nightmares.

Kind of cute and more than a little creepy, Spider's Bride is one of those games that makes people who see you playing it ask with mild concern what, exactly, you're doing. I suggest your response should be, "Killing butterflies to feed my bloated spider soulmate. Duh." and follow it up with a look that suggests they're not firing on all cylinders. After all, you don't have to explain your love of squashing butterflies against a dirty ceiling! I understand you. Spider understands you, chère.

A quick tip: if you can get the mop over to the right or left side and lean it against the wall, it'll stand up on it's own and give your wrist a break from all that balancing.

Creeeeeeeeeepy. And kind of difficult to guide the girl and her broom if you get stuck over in a corner.It's difficult to balance and aim at the same time. And the crunch was rather disturbing.

I'm especially creeped out by the web-entwined corpse dangling from the upper left-hand corner of the ceiling. Gross.

The game is difficult because:
- the game releases multi-butterflies late in the wave
- the butterflies often don't fly high enough
- moving the mouse out of the rectangle often causes you to drop the broom

I don't care for it.

Well done black humor, but NOT for kids, despite the initial cute look.

The actual game play is innovative, but gets somewhat repetitive after a while. And there is too much of a chance to get stuck on the sides.

Worth a play, but too much of a grind to go all the way to level 20.

Do the big moth-like ones take more hits? Because I swear I smacked one like five times and it was still flying around. Didn't help that it was having fun mocking me from below the broom-line.

My favourite part of this game was the music. It gave just the right atmosphere, and I'd even want to listen to it outside of the game.

(The intro seemed to go out of its way to be needlessly spooky, though. I couldn't help but respond to the Spider's reproach with, "If she doesn't have the brains for this problem, you certainly aren't helping much")

Ultimately, whether you win or lose depends on if the game feels like sending the insects up to the ceiling quickly, but it isn't unfairly stingy with this. I'd say "play it once to see if you like it, then play it again if you do!"

a visible mouse cursor would have helped a lot, tough to tell when you've left the play area.

Ok, I'm going to have to remove jig from my rss reader if every page I open is going to have an auto-play ad featuring sound. I love the site, but not as much as I hate that.

Sorry to derail the comments.

[Edit: I'm mad as hell about those ads. I am working to get them removed immediately. I did not approve them and they will be gone ASAP. -Jay]

Anyone with the brain to handle a broom will soon notice two things, which will help them tidy up and gather food for a growing husband:

1: Colourful insects get trapped in rough bristles easily. Coax them into it first; you can't catch food or dust with fast, hard swings. They won't even feel a thing.

2: New spawn will not hatch until the last wave is gone. Even when the timer reaches 0, you can still delay or crush anything still around. If time is running out, save one of those metal moths to crush it and its spawn quickly, rather than chase them down one by one.

You don't expect a healthy spider to dine on venomous wasp innards, do you? Be a dear and prepare some dinner...

A nice review and a good looking game lured me in but it's not really one for me. I found it too frustrating.

is it me or are there different types of metal butterflies?

I love the spooky disgustingness of it all. Very Burton-like. The dangling corpse (which you can even push around with the mop) is an especially grim touch.

The gameplay is innovative, but for me just isn't gripping enough. I found it fun for a few minutes, but couldn't be bothered to play it through.

I love this game...I just wish it was easier to get past the rough stuff...getting "stuck" because of moving the mouse off the screen, or the butterflies cheating and hiding at my feet. Moving was rough too I think, but if not for the others I could deal with that.

What the review said about people asking what you were doing happened to me exactly as described, before I read the review.

Bro: "What are you doing?"
Me: "Killing butterflies for the spider"
Bro: "Why?"
Me: *No further response due to playing game*

If I had a better mouse this may have been more fun as well, as I was getting annoyed every time I tried to do anything and my mouse jumped around like a flea. Good game overall though.

How about that ending? CREEPY!

I'm sorry, there's no way I'll be able to play this whole thing through... too difficult. But there's a creepy ending? Would someone care to tell me what it is in a spoiler, out of curiosity?