Ever played the improv game where you and your friends create a story by having each person say a few sentences? Usually it ends with a overly dramatic climax of a story with no real plot and lots of giggles. Well, what if you did the same thing, but with a game? The Seventh Door shows us what can happen when great serious minds come together to build an adventure game we've never seen the likes before. Sriden, Creation, Trotter, Amalrich Von Monesser, Roi of the Suisse, Criket, Mapache, and AlterEgo, members of the Famas community, each created a section of this free mystery noir game and created a pretty chilling supernatural thriller. This indie game may not flow as smoothly as other story driven games, but its unique gameplay has got them all beat. While the [arrow] keys and [spacebar] will get you through most of the scenes, each one seems to have extra controls to it. Thankfully it's good with letting you know how to control things, but know you're going to be all over the keyboard. You see this story from two different sides... Julian, a man who wakes up on a rooftop only knowing a name, and Detective Zikas, who is investigating a murder unknowing it will throw him right in the middle of a grand scale conspiracy. With each section a bit different than the one before, it will have you fully locked in until the end. 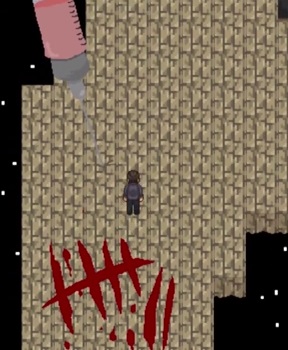 The Seventh Door was originally in French, but two translators helped ease it into the English language. There are still a few bumps here and there with the translation, but it doesn't ruin or confuse anything with the story. Sadly, it's the gameplay that has a few abrupt 'bumps' as a few of the scenes, while not necessarily out of place, are such a change they feel a bit awkward. Near the beginning you go from searching the scene for clues to suddenly dodging other cars in an odd minigame. But that comes with the territory when a group makes part of a game separately. Other than that, the gameplay is pretty interesting, and in some scenes you are given a lot of choice with how you want to get through it. While most decisions won't change the outcome, it's great to have such freedom that lets you solve problems how you want to. The unique way of telling the story through more than one person's view lets you receive only a few answers and hints here and there to the greater mystery, though near the end it feels as if one of the characters wasn't that big of a character after all. Still this is a clever supernatural storyline that lets you play a game far different from any other game you've played before.

Looks interesting, but RPG Hub gets errors every time I try to install. Oh well.

Thanks for this nice and interesting review, Lori (I'm the project coordinator on this game, hi).

Littleghost > The game is primarily meant for Windows, I can't help about installing RPG Hub, sorry. :/

Forget RPG Hub and get Wine and Winebottler. They turn windows downloads into Mac programs. It works very well for me! Strangely, you will occasionally get a program that will install without a hitch, but it does not have an icon. No clue why.

Thank you for this amazing game! Your whole team did a wonderful job on it! It comes together so well and had me hooked every minute of the way. I just finished it not too long ago (2:34 AM) and it was a great experience. I loved the whole thing; so much was done that I had not seen in an RMXP game before. Awesome game!

I'm a little late to answer but thanks a lot RamblinRob, nice to hear that.