Sometimes all we need is a little follow-through in life. Aspiring developer Amidos found that out when he created a game called Random RPG for a bi-annual Arabian game jam. Convinced that it was a total wash, he stuck with it for another week of overhauling anyway and came up with The Rogue Puzzle Game, a puzzle game deftly shuffling together the feel of a Sokoban title, a look reminiscent of Legend of Zelda, and some utterly killer NES-type soundtrack music. Result? The Rogue Puzzle Game was picked as one of only three finalists in the Game Nomad competition and is set to be presented at Gamer's Day, Arabia's largest gaming event. More importantly, fans became fascinated by the game's unique play experience. Find your way out of fifteen dungeon levels by attacking monsters with swords laying conveniently strewn around the dungeon floor. The swords re-orient as you move so they're always hilt-towards-you, and need to be pushed into monsters. Each sword does one point of damage to whichever immediately-adjacent monster you push it into, but monsters could have more than one hit point. Fortunately, their hit points are visibly displayed clearly on each monster. 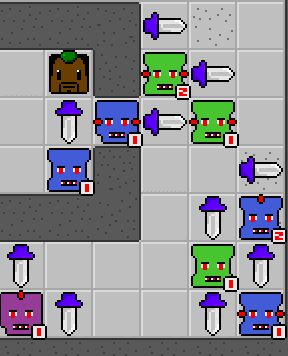 The strategy of which swords to use on which monsters is a large part of the fun here. Use up the more conveniently-located swords early on and you won't have enough of them — or the right ones — to use later on with the last ones. Planning is essential here. Movement couldn't be easier, all with the [arrow] keys. Augmenting the strategy element is the fact that you can attack a monster without a sword if you're willing to forfeit a Zelda-like heart-shaped hit point for it, so placement of swords isn't always the pattern you'll need to be looking for. HP can be partially restored by potions laying helpfully around some of the dungeon levels, but they'll only restore one point. Planning out your moves in advance and managing moves to available swords to monsters to HP to potions is the charm of the game, and in that department it really does have a lot of similarities to more conventional Sokoban titles. You may have mixed feelings on the quality of the graphics, and how you feel about them will depend a lot on whether 8-bit graphics evoke a pleasing wave of nostalgia for you or image of a troop of drunken monkeys attempting to master MS-Paint. At fifteen levels the game feels a little lightweight and the gameplay dynamic could've been developed a bit more, but when those are the only complaints to a unique game in its prototype stage they're just different ways of saying, "More, please."

I really enjoyed this: there's a clear logic to be followed in each level if you wish to complete it without losing any health. A sword with a single target is obvious, as are spears with only one or two. An arrow's target can be identified if it only has a target in one direction, and you can pair up certain weapons with monsters by identifying a monster that can only be hit by one weapon on the board.

The "Life" mechanic gives you a little leeway if you make a mistake, and on a few puzzles serves to make the player identify the monster that can't be hit with a weapon.

The concept could easily be expanded with more types of monsters (eg, monsters that are only vulnerable to certain weapons, monsters that must be killed in order, large monsters that can be hit in multiple places) without changing the underlying logic of the game. More weapons (spears that hit two in a row, weapons that deal more than one point of damage per hit) could also be used.

The game could really use an undo function for even just one move, as there were a few places where that would have saved me from starting a level over from scratch.

I'd gladly play more levels of this, or buy it as a standalone title with some better music and more variety to the graphics.

This is pretty cool.

SirNiko,
Good ideas. I second implementing all those ideas.

What does "Alpha Ended" mean?

Rygar - I'm going to assume that it means that the alpha version (the game you just played, and it's status) just finished.

It seems that the author intends on continuing / expanding this game. Just an assumption though.

I would assume there's maybe an expanded version of the game in the works, with more levels, and maybe more types of weapons, etc. Maybe something you'd have to pay for, and maybe not.

This is how you do a puzzle game. Keep the premise simple, add new elements gradually, then layer them together. The graphics are take-it-or-leave-it, as is the music, but those don't detract from the fun of planning out where to move and attack.

This would make an excellent mobile game, especially on mid-sized tablets. It might even work on the smaller display on phones, depending on how the controls are done.

Would love to see more of this

@SirNiko, SHA
Thirded, this definitely has potential. Some ideas I'd like to add:

1) Something that blocks arrows but lets you pass through (shields?).
2) Diagonal movement, possibly restricted to X turns after a pickup, which would make new attack angles possible.
3) Monster infighting, perhaps by somehow moving them onto one tile and having the one with more health remain, injured appropriately.
4) Doors or gates, and special monsters that carry a key but those would typically be in a difficult spot and immune to walking into them.

Not saying those are all good ideas, just something that came to mind while I was playing.

I am quite reminded of WonderQuest and DROD by this game, it's got the good puzzler spark I like in those games of simple mechanics being layered on to great effect even though it's only scratching the surface of what can be done with them.

Neat ideas. 5/5. The only thing that would ruin this game is if it were ignored forever, just like "Help! It's The Unfinished Shadow Game!" The problem with THAT game is the term Unfinished, which naturally implies that a finished version will be released in one month, two years tops. I think it has been about 7 years since it was released.....

What encouraging comments! I just wanted to let you know that I've invited the game's developer Amidos here, and that your comments are being read and appreciated.