The Right Way is a sweet little puzzler about arguably the world's most useless robot. Sure, it's adorable with its red light and its, um, unblinking, soulless eyes, but it doesn't do much else than jump around. This is the 21st century, we were promised mechanical butlers, soldiers and fast food servers! Instead, you have to serve the little scrapheap by making a path for it in each of the twenty-four levels. The robot will move straight ahead along the tiles until it finds an obstacle, and then it will turn right. The goal is to guide it so that it reaches the exit, which is the blue circle on one of the tiles. 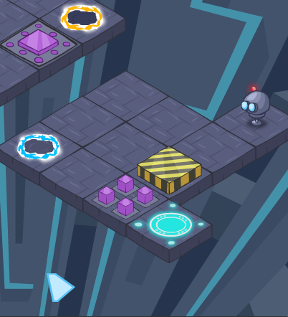 The gameplay progresses at a leisurely pace, making sure you have the time to figure out each new element before moving on. At first, you'll get special blocks that will force the robot to make a turn. After that, you'll be introduced to directional arrows, moving walkways and, of course, blue and orange portals. The premise is simple enough, but the possibilities are endless, and the game could have easily had twice as many levels. The puzzles rely on spatial orientation, so those of us who have trouble telling left from right might find them a little confusing at first, but it only takes a few minutes to get accustomed to. The difficulty level is never so high as to be annoying, as the puzzles can be solved with a bit of trial-and error; it also helps to know that the game can be paused at any moment and the ever-valuable undo button is at your service. So there's really no excuse not to try The Right Way – it's charming, clever and it will acquaint you with the strange business of robot babysitting.

For anyone else who might be struggling, here's a piece of information the game never actually tells you: you can place blocks after hitting 'start'.

And some stage need not to use all items

If not for that first comment, I would've assumed they made a huge mistake in design. There definitely needs to be something that tells you that info.

The animations are painfully slow. Needs to be fixed.