Man, those ancient pharaohs had it rough. Keeping cobras out of the marketplace. Trying to collect stamps by fulfilling citizen requests. Dealing with the Pyramid Association. And how'd they ever decide where to build their hammer shop?! Kairosoft, makers of Kairobotica, Beastie Bay, and the Story series of games, has recreated a slice of the ancient world with The Pyraplex, a mobile simulation that will steal massive chunks of your time and refuse to let go until you're the pharaoh of all the pharaohs. 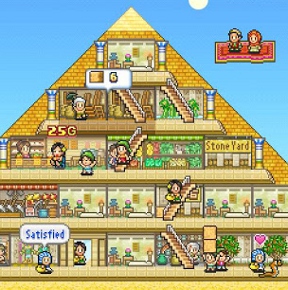 You play the role of a pharaoh (or whatever you want to be called, chief) building a pyramid in the desert out of sweat, stone, and commerce. By mining rocks from the nearby wall you can construct rooms in your pyramid that do everything from house workers to provide shops for visitors to peruse. The goal is to gain coinage and up your pyramid's appeal so you can build your pyramid to the sky, all while managing a complex economy within the walls of your desert abode.

Two main stats to keep watch on are coins and hearts. Coins are gained from visitors buying things and can be used for renovations, buying new shops, and paying upkeep costs. Hearts are a form of customer satisfaction currency that go towards the less tangible elements of your pyramid, like training workers, sending out trade caravans, or ridding the place of cobras. There are other numbers to check on occasion, such as worker happiness, individual worker stats, neighboring countries and their desires, and the overall perception the people have of your structure.

Here's where the big advancements come from: your stamp cards! Completing requests earns you a few stamps on these nifty little things, rewarding you with items or new abilities every so often. Earning respect and pleasing the Pyramid Association is another consideration, and between managing shops and workers you'll also try to sculpt a well-balanced, symmetrical, and, you know, pyramid-shaped pyramid. 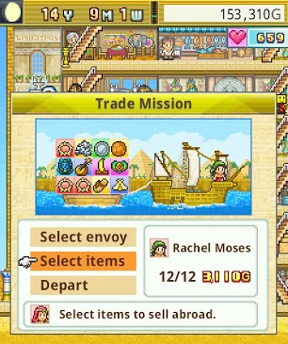 Analysis: The Pyraplex falls on the simpler side of Kairosoft's offerings, sporting a slightly more streamlined interface that gets along well with touch screen devices. The gameplay itself has also been pared down, introducing new elements only when they're available and relevant instead of lumping everything on you from the start. This can lead to some moments of "oh, wish I had known that earlier", but on the whole, it makes getting into the game much easier.

There's so much more to The Pyraplex that isn't mentioned in this review, and unlike some of Kairosoft's other offerings, this game never feels overwhelming. Sure, you're in charge of an entire desert economy, but all you have to do is hire a few workers, give them a place to live, assign different tasks to keep your influx of coins, hearts, trade items and construction stones coming in, deal with random events, renovate shops, move things around to preserve the overall shape of the—you get the picture. Sounds like a lot, but it's all quite manageable and introduced at regular intervals to keep you grinning with things to do.

Apart from being built upon the same skeletal structure as Mega Mall Story, The Pyraplex does have a few minor interface issues, the most pressing of which is text overlap. Fitting English words in the same space as Japanese characters has always been a challenge for localization teams, and in this case it wasn't carried out with 100% precision. Some letters are clipped off at the end of windows, and blue colored text often overlaps text preceding it. Nothing becomes unreadable, but it looks a little sloppy and is cause for pause.

Really, The Pyraplex can be summed up in just a few words: it's another Kairosoft game, and you want to play it. It's a little on the expensive side, but the amount of fun you'll have in the first few fevered hours alone will be worth the investment.